(H)OM(E)NIBUS CULTURE AT A TIME OF LOCKDOWN

Three years ago in December 2020, while individuals in the western World were entering the festive season, media accounts had started reporting news of an infection spreading in China – the SARS-CoV-2 or Covid19. Quickly, the virus spread across the World to become a global pandemic, resulting in a dramatic death toll and a shock for the economy and the whole of society unprecedented in modern times. Like in many other countries, also in the UK, state-imposed restrictions on physical movements meant individuals had without notice to find alternative ways to socialise and keep themselves occupied while at home. For many, engagement with cultural and creative content became synonymous with digital consumption. In a recently published paper, we study the impact of lockdown measures in the Spring 2020 on UK individuals’ digital consumption of cultural and creative content (CCC) and assess how this varied by type of CCC and across different socio-demographic groups.

As home became the place to spend most of the time, online activities became an obvious way for individuals, at least those with an internet connection, to escape their sudden social isolation.

A concern might have been that pre-existing differences across individuals and households in accessing creative and cultural types of content (Bourdieu, 1984) would be reflected in this “new’’ enforced home-bound environment too. At the same time, the pandemic shock brought about substantial changes in individual circumstances, related to pausing or losing jobs (Crossley et al, 2021), caretaking responsibilities (Russell and Sun, 2020), or working from home patterns (Caselli et al, 2021): all of which might have been expected to impact on household resources and available time, and therefore consumption. Taking advantage of data from a purposefully collected survey of UK individuals aged 16 and older, conducted by the Creative Industries Policy and Evidence Centre in collaboration with the UK Government’s Intellectual Property Office, we study how Covid19-induced national restrictions affected individuals’ consumption of CCC in the UK. We focus on digital consumption of Music, Movies, TV, Games, (e-)Books, Magazines and Audiobooks, taking place via downloading, streaming or online purchasing of physical media.

We use the data to build indicators regarding individuals’ consumption decisions before and after the introduction of national restriction measures (23rd March 2020), in relation to each content category (Figure 1) and considering all types of content consumed jointly (Figure 2).

We find that the national lockdown was associated with a generalised increase in the consumption of CCC except for Books (about -20%) and Audiobooks (roughly unchanged). Consumers also increased their overall consumption of CCC, as captured by the total number of CCC consumed. The latter finding is driven by individuals who previously (‘Pre’ lockdown) displayed low consumption of CCC. 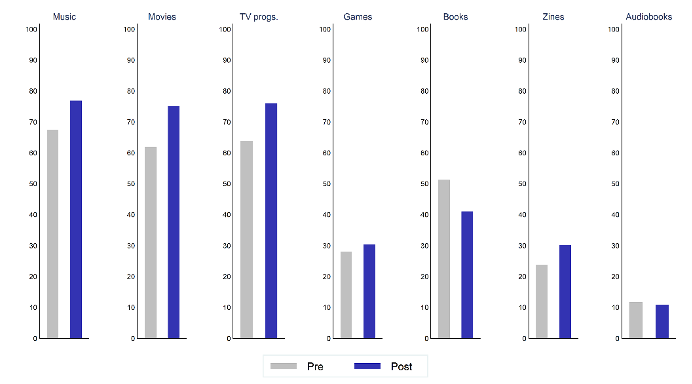 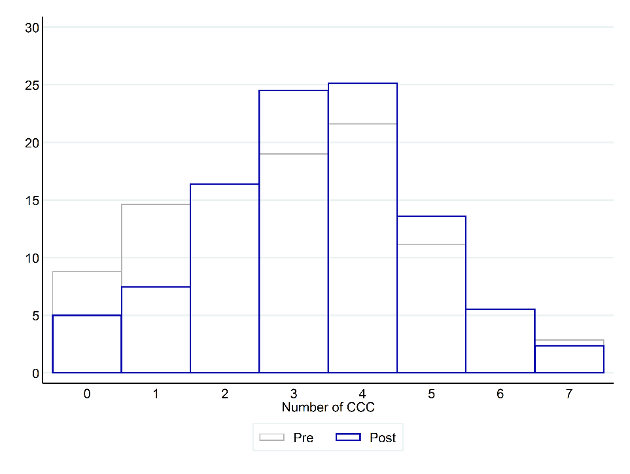 To test the extent of these changes we estimate probability regression models that account for all observable individual characteristics related to social, demographic and economic factors. We also run the same exercise focusing on the overall number of CCC consumed by using count data regression models (last column of Table 1). Our results confirm that, on average, there has been a shift in the likelihood of consuming Music, Games and Books in particular, with the odds of listening to Music and playing Games more than doubling following the introduction of national lockdown restrictions, while the odds of reading Books were halved. In addition, the results suggest that individuals increased their overall variety of CCC consumption. Our analysis also highlights the importance of accounting for persistent differences across individuals, e.g., pertaining to their occupational status, living arrangements, age or socio-economic standing.

To this end, and to provide further insights on the determinants of changes in consumption of CCC during lockdown, we separately investigate changes in relation to each of the socio/demog/economic characteristics observed, namely: occupational status, living arrangements, household socio-economic standing, gender and age. Interestingly, we do not detect strong differences across groups. For example, we hardly find any gender-related difference in the change in likelihood of consuming CCC during lockdown, or across individuals in different living arrangements. Another dimension worth noting is household socioeconomic standing: this factor is well known in general to affect the likelihood of accessing culture, and we might reasonably have expected existing inequality of access to be exacerbated during lockdown, but this is not something we observe in our estimates. On the contrary, individuals at the bottom of the distribution are found to have not reduced their Books consumption during lockdown compared with individuals belonging to households with higher socioeconomic standing. Most of the change in CCC consumption in lockdown appears to have been shaped by age differences, with the youngest cohort of individuals more likely to have listened to more Music and they were not less likely to have read Books. In contrast, lockdown appears to have increased by most the likelihood of playing Games for the oldest cohort.

What are the main takeaways from our results? A first conclusion is that Covid19-induced restrictions on socialisation and movement in the UK resulted in an overall increase in the likelihood of engaging with cultural and creative content, but there were differences across types of content. Lockdown undoubtedly represented a massive and widespread shock affecting individuals irrespectively of their conditions. While on the one hand existing differences in access were apparently not mitigated by the enforced shift to digital, on the other hand they did not widen further, for example in relation to those strata of society that found it harder to bear the economic cost of access to culture.