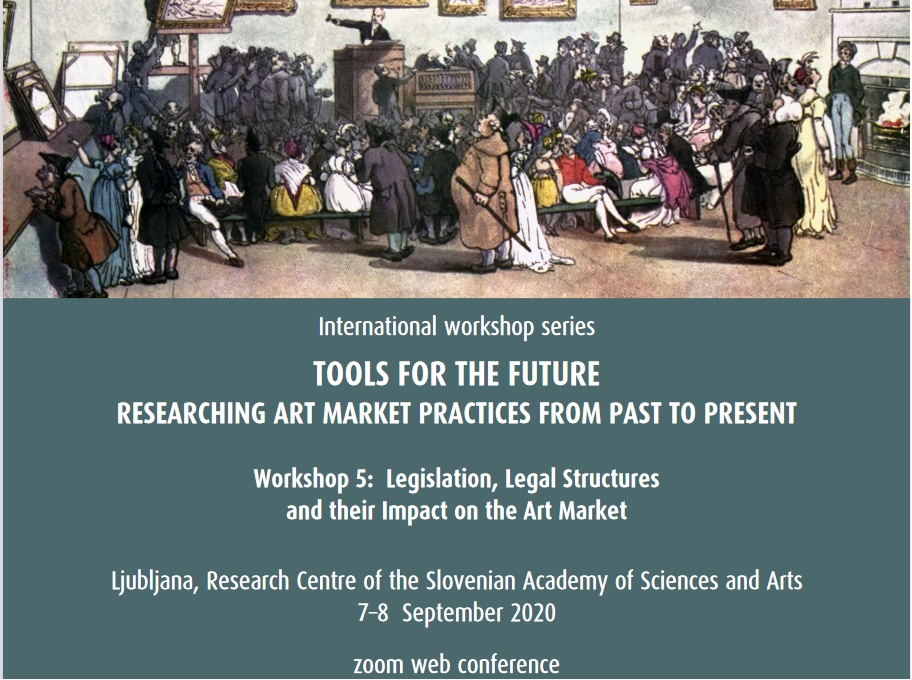 Beginning of September was time for the fifth workshop in the series Tools for the Future: Researching Art Market Practices from Past to Present. The workshop took place online in organization of the France Stele Institute of Art History of the Research Centre of the Slovenian Academy of Sciences and Arts (ZRC SAZU). Its topic was the role of legislation and legal regulators in the art market and included some of the best researchers on art markets at the intersection of art history, legal studies and cultural economics.

International Workshop Series Tools for the Future: Researching Art Market Practices from Past to Present has been established in 2017 by three professors, Elisabetta Lazzaro of HKU University of the Arts Utrecht, Nathalie Moureau of Université Paul Valéry Montpellier 3 and Adriana Turpin of IESA, Paris and Society for the History of Collecting.

Through individual presentations followed by group discussions, the workshops series aims at bringing together international scholars and professionals from different disciplines, periods of study and areas of practice of the art market to confront key issues and related methods that can be used to interpret, analyse and operate through the structures and principals of the art market. Previous workshops were on art collectors (Montpellier, June 2018), the artist as an entrepreneur (Utrecht, December 2018), formation and development of new markets (London, June 2019) and communication strategies (Rome, November 2019).

The fifth workshop, organised by the France Stele Institute of Art History ZRC SAZU (coordinators were Dr. Renata Komić Marn and Dr. Tina Košak), addressed the role of legislation and legal regulators in the art market. The relationship between law and art can be traced back to the Middle Ages when the workshop and apprenticeship rules and guild statutes determined artists’ and other agents’ working tasks, regulating production, ensuring quality and enabling fair marketing and dissemination. Since the early modern period, estate law has defined (and limited) inheritance and ownership of artworks. While contracts with clients controlled the quality, realisation, delivering and on-time payment of private and collective artistic commissions, contracts between artists determined standards of cooperation.

With the rise of the auction houses from the 17th century onwards, governments have tried to control auctioneering practices and increase transparency, issues which remain relevant to the market today. Similar considerations apply nowadays for on-line trade and digitisation of artworks, transactions and consumption, including cryptocurrencies and blockchain. The early modern period also saw the origins of copyright law, with privileges and censorship of reproducing vividly differing across Europe. Throughout the 19th century, copyright regulations were still nationally oriented, thereby resulting in national legislations obstructing or encouraging the international expansion of markets. Since the 20th century, we have witnessed the internationalisation and globalisation of laws, which are still in progress.

The workshop took place virtually on 7th and 8th of September using the platform Zoom which became so renown in the time of the pandemic. It featured researchers from Austria, Czech Republic, France, Germany, Italy, Japan, Netherlands, Poland, Romania, Slovenia, UK and USA. Keynotes from Sophie Raux of University Lyon 2 and Alicja Jagielska-Burduk of UNESCO Chair on Cultural Property Law at the University of Opole in Poland were on the topics of Regulating the visibility and circulation of works of art on the market and Art market’s legal challenges. In general, most of the online discussions have been lively and the event has been denoted in one of the final remarks from Adriana Turpin as a big success.

The field of research on art markets in general is experiencing growth in recent years, in particular with the establishment of The International Art Market Studies Association (TIAMSA) with its several Subsections and Groups. The field which is at the crossroads of two larger streams of thought, art history and economics (including sociology, legal studies and other disciplines), promises interesting scientific interactions in future and seems to great extent still unexplored in its many possibilities.

The online workshop in organization of ZRC SAZU pointed to some of those, related to the legal aspects of the art markets. The role of the guilds and historical groupings of people involved in the art markets, the role of copyright legislation, policy aspects (intersection of policy and legal aspects for art markets), legislative measures in the area of art collecting, the genesis of individual country art markets, art markets in Central and Eastern Europe, international trade with artworks, legislative aspects for artworks in museums and the deaccessioning phenomenon, street art, classification of artworks in terms of legal and economic aspects and other topics were featured with interesting presentations.

To my knowledge there is still no information on the place of the sixth workshop of this series. Nevertheless, the present one confirmed the necessity and benefits that online scientific interactions can bring and how they are changing the present landscape of research. Communication with scholars across the globe has become a daily feature and globalization has gone to extreme in terms of scientific interaction. Where this will lead only the future will be able to tell but it is apparent that scientific interactions have been changed to a significant extent with the COVID-19 pandemic and the changes are predicted to last. Workshops such as the one above only demonstrate possibilities and benefits this can bring.

With this in mind I will end with a short announcement. Two editorial members of EconomicsTalkArt.org, Trilce Navarrete and myself will follow the above described “globalized vibe” and coordinate an international team of researchers in the organization of the online seminar series in cultural economics in the framework of Association for Cultural Economics International (ACEI). It will feature a lot of the research in art markets, but also cultural economics in its broadest sense: in its micro, macro and methodological aspects. You are warmly invited to follow this series as well in future!