WOMEN BENEFIT MORE: CONNECTIONS BETWEEN SLOVENIAN VISUAL ARTISTS OF THE 19 AND 20 CENTURIES 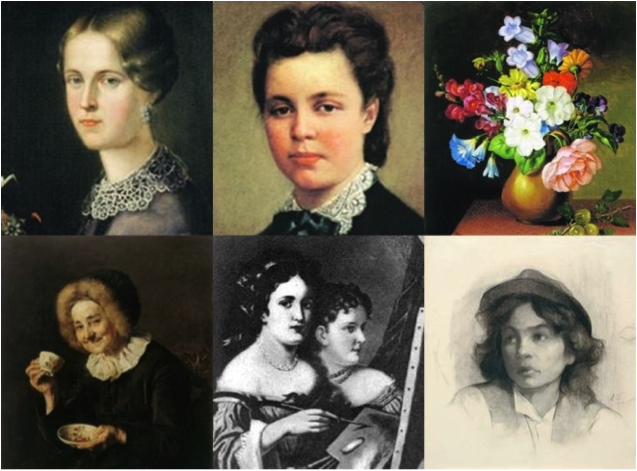 Slovenian art history has received very little (if any) attention from the viewpoint of network theory. Are the artists more productive when forming and working in groups? Is there any special influence of gender, age, occupation, or income? Are there any benefits to connect with artists from as diverse fields as possible? We find highly productive women artists make more intense use of their networks and provide some reflections.

Surprisingly, little attention has been provided in the art history so far to the perspective of the network theory and groups of artists throughout history. Such questions have been posed and partially answered in previous years within the scientific literature of mainly cultural economic origin. There are three classic theories that explain the benefits associated with geographic clustering. First, Marshall (1890) argues that the cost of transmitting knowledge rises with distance. Second, Jacobs (1969) states that the most important knowledge transfers come from the outside of the core industry and that dissemination of complementary knowledge should facilitate innovation. Therefore, the presence of a high degree of diversity might potentially lead to greater benefits within a geographic cluster. Third, Porter (1990) argues that local competition in specialized, geographically-concentrated industries is the biggest stimulus for growth. That is, the presence of multiple rivalling individuals should be the source of important incentives for out-performing the competitor.

The possibilities of social network analysis in studying the effects of clustering/networking on artists’ productivity have to our knowledge not been explored yet. Therefore, we decided to verify, on one hand, whether any positive effects of networking on productivity of visual artists could be found in Slovenian historical data, and, on the other, whether such effects were dependent upon the gender of the artists.

In our article, we used the web-based encyclopedia Slovenska biografija (operated by the Slovenian Academy of Sciences and Arts) containing data on numerous notable Slovenian visual artists from the 19th and 20th centuries. We analyzed the network size and openness of individual artistic figures and movements throughout the period. Moreover, we studied the influence of network centrality (connectedness) on cultural production using a newly constructed instrument. Finally, we compared the performance of women to men artists. We observed that highly productive women artists used their network positions significantly more intensively than men. Networking is beneficial for the artistic productivity, yet to a slightly smaller scale and/or significance as was speculated in some previous studies based on geographical clustering. We were able to control for the apparent endogenous, reverse causal relationship in the model (see e.g. Borowiecki, 2013) using an innovative, new instrument: closeness centrality.

The figure below presents the results of the network representation of our sample. When clustering the artists belonging to a certain historical movement and/or artist genre, we obtained six large groups, which are related to the general historical artistic movements (The Impressionists, The Modernists), historical time (The Old Masters), Slovenian-specific art scene (The “Vesnans”, The Layer’s workshop), and, finally, genres and types of visual art (The “Sculptors”). Some artists belonged to different groups at the same time (e.g. Anton Karinger to The Old Masters; Alojzij Gangl to The Sculptors; most of “The Sculptors” to “The Modernists”, etc.) and few artists can be seen as representatives of a different group, viewed from the existing art historical knowledge. Nevertheless, the obtained groups very well match the actual positions of the artists in the existing Slovenian art history.

Figure below: Visual representation of the analyzed network 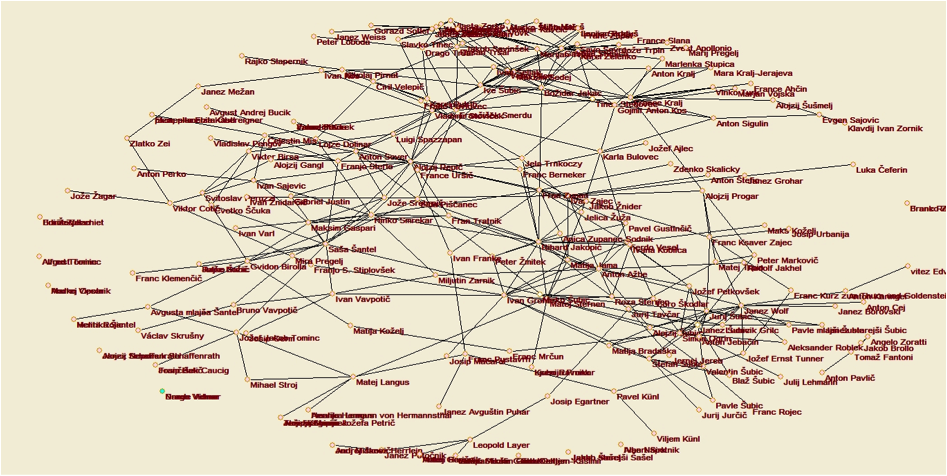 Finally, we explored the relationship between network centrality and productivity comparing women and men. To this end, we constructed a series of interaction variables and checked their statistical behaviour in the models. Although the evidence was not completely uniform (for the betweenness centrality parameter), it nevertheless showed that women tend to have a stronger interaction, or networking effect than men and therefore tend to use their network central position to improve their productivity much more intensely than men. To our interpretation, three main elements related to women better positioning in the network may explain this effect:

Although all three interpretations seem likely, we opted for the first one, which best connects to the historical role of women visual artists and fits nicely in the existing art history literature. Nevertheless, we hope that verifications in later research could provide a better-grounded and final answer to this observation.

Andrej Srakar, Ph.D., is Research Associate at the Institute for Economic Research in Ljubljana and Assistant Professor at the Faculty of Economics, University of Ljubljana. His main fields of interest are cultural economics and economics of cultural policy, mathematical economics, econometric and statistical theory, applied econometrics, economics of ageing (SHARE database) and macroeconomics.

Petja Grafenauer, Ph.D., is a curator, writer and lecturer on contemporary art and magazine editor. She works as Assistant Professor at School of Arts, University of Nova Gorica and Vice-Chair of the Department of Photography at VIST – Higher School of Applied Sciences in Ljubljana. She curated numerous group projects and exhibitions, working with some of the most recognized Slovenian and foreign artists.

Marilena Vecco, Ph.D., is Assistant Professor of Cultural Economics at Erasmus University Rotterdam. Her research focuses on cultural entrepreneurship, management with a special focus on cultural heritage (tangible and intangible) and art markets. She was head of research of the International Center for Arts Economics (ICARE, 1999–2010), and has researched and consulted for several public and private organisations, including OECD, World Bank and The European Commission.

About the cover image: