Heritage in European cities is recognized and appreciated worldwide for its uniqueness and beauty. Urban heritage can stimulate local economic conditions in addition to carrying social, historical, and cultural values. This nexus of economic development and cultural valuation can be influenced and strengthen by territorial characteristics such as a creative environment and a cosmopolitan identity.

European cities are internationally recognized and appreciated for their extraordinary, distinctive, and unique cultural heritage. Artistic, historical, and cultural assets, both in their tangible and intangible forms, represent a fundamental resource for local communities. Besides being a herald and a source of social, cultural and identitarian values, the role of cultural heritage in fostering and promoting also economic development has been witnessing an increasing recognition in the last twenty years.

Several initiatives are put forward by both European and international institutions with the aim of sustaining, promoting, and valorising urban culture in its multifaceted forms. A successful example is the European Capitals of Culture initiative that puts arts, cultural heritage, traditional events, and historical conscience at the heart of European cities supporting a year-long celebration of culture. At the international level, another positive example of these kind of initiatives is the UNESCO Creative Cities Network that aims at promoting collaboration among cities that rely on creativity as a strategic resource to catalyse their sustainable urban development.

Based on these two actions as well as on the international cultural festivals, the Joint Research Centre of the European Commission recently classified 190 European cities as Cultural and Creative within the context of a database named the Cultural and Creative Cities Monitor. This is particularly useful as it provides information on how the included cities perform on a range of measures representing, among others, their cultural vibrancy and creative economy. This new tool is particularly important especially within the context of a growing interest in cultural heritage impact research. As highlighted in the Cultural Heritage Counts for Europe report, investments by EU institutions as well as member states in collecting and providing quantitative and qualitative data on cultural heritage has become crucial. The need for exploring and confirming the beneficial impact of culture on economies and societies cannot be fulfilled without appropriate and precise data. Appropriate data collection and analysis has the ultimate goal of informing the design of EU strategies and policies related to cultural heritage.

The first idea is that urban cultural vibrancy, intended as the presence of cultural venues and facilities (i.e., sights and landmarks, museums, cinemas, concerts halls and theatres) and the public participation to urban culture could benefit the city itself but also the broader region of belonging. In fact, cultural heritage activates a bundle of activities and services linked with several economic sectors such as tourism, construction, archaeology, retail, and marketing and events. Besides, it stimulates cultural engagement, sense of belonging and shares systems of meaning. Even though intangible, these values might influence the functioning of local economic dynamics. Furthermore, participation in cultural activities breathes life into heritage sites allowing culture to be imbued and blended with individuals and societies. Since cultural participation is not limited to the urban population, we expect the beneficial effects to generate wider repercussions and benefit the whole region hosting the cultural and creative cities. The second idea is that the beneficial role of culture in influencing economic conditions does also depend on the specific context that characterizes each cultural and creative city. In fact, different contexts might be more or less capable of valorising their heritage in socio-economic terms depending on their peculiar territorial characteristics. More in detail, two peculiar territorial traits have been investigated: creativity and cosmopolitan identity. On the one hand, creativity has been widely acknowledged by the literature as beneficial for local development by directly generating jobs but also by inspiring innovation and fostering learning capacity, flexibility, and entrepreneurial energy. On the other hand, cosmopolitan identity, interpreted as an open-minded attitude and a positive disposition towards peoples, cultures and diversity creates an urban atmosphere in which trust, tolerance, and openness favour local economic competitiveness. Different combinations of these two territorial traits exist and have been formalized in four urban patterns as shown in the following figure: 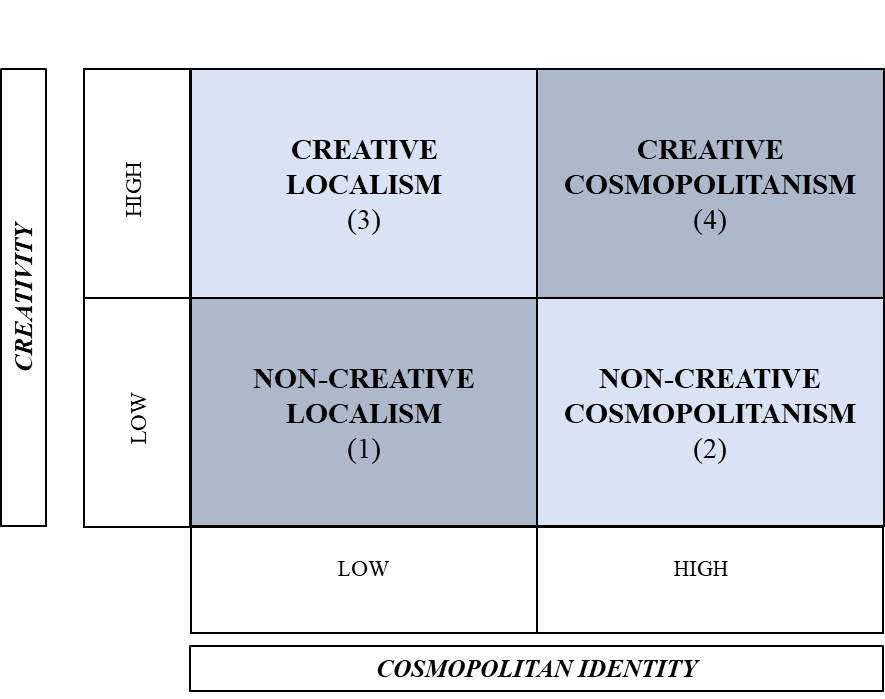 The results of some empirical analyses show that in fact urban cultural vibrancy has a positive influence on local economic conditions of the whole region that hosts the Cultural and Creative City confirming our first idea. What is more, this effect is even stronger in cities characterized by a creative cosmopolitan urban pattern. Overall, cultural vibrancy and participation to culture favour and stimulate local economies. Furthermore, a fertile creative environment in synergy with a cosmopolitan attitude allow cities to better capitalize their cultural activities benefiting both the cities themselves and their hosting regions.