By Pia Nilsson and Mikaela Backman

The development of regions is determined by the knowledge and skills of people living there. Thus, it is in the interest of local policy makers to find location-specific attractors. New research shows that cultural heritage is one of these attractions.

Regional growth and development are a consequence of the characteristics of the individuals that live there; their skills, abilities and knowledge define human capital. Today where individuals are mobile across countries and especially across regions, an important task for local policy makers is to attract skilled individuals. There is a big focus in the academic literature on how regional characteristics such as location-specific amenities can attract skilled labor. Since the demand for amenities tend to rise with income and education, amenity valuations vary for skilled and unskilled workers in that high-human capital workers likely have a stronger preference for amenities. This is in fact confirmed in numerous academic studies where natural amenities, favorable climate, proximity to lakes, oceans, forests and mountain areas play a significant role in explaining individual location decisions, and especially of those individuals with high levels of human capital. Thus, they are identified as important drivers of regional growth.

Although the influence of natural amenities is well documented, only few studies have analyzed the influence of cultural heritage as a potentially important local attribute that is able to attract high skilled labour and impact regional growth. This is surprising since there has been an increased focus on cultural heritage as an area of priority and as an important strategic resource with the potential to improve regional attractiveness and competitiveness.[1] Sweden is no exception and cultural heritage is viewed as an important local resource that is able to generate social and environmental benefits and contribute to community-led development.

With the intention to gain a deeper understanding of the contribution of cultural heritage in attracting skilled individuals we also investigate whether the associations differ between urban and rural regions. Our study provides support for the importance of built heritage and cultural environments in explaining the local growth of skilled individuals in Sweden. The local supply of built heritage (listed monuments, historical buildings and sites) and cultural environments attracts skilled individuals. These results suggest that cultural heritage constitute an important place-based resource in Sweden with the potential to improve regional attractiveness.

We also find significant differences in the outcomes depending on regional conditions, i.e. how it differs in the rural landscape and in cities. Among the tested amenities we find that recreational areas have a larger effect in urbanized areas compared to rural areas.

The valuations of natural amenities (in this case recreation areas) are valued higher when located in agglomerated regions. These results contribute to a deeper understanding of the role played by built heritage and cultural environments and natural amenities as drivers of change in urban and rural Sweden and ad to the debate on amenity-led regional growth in important ways.

A line of argument that follows is that amenity-led regional growth may not be a one-size-fits-all solution and that regions may have varying potential when it comes to exploiting amenities depending on their size. Moreover, we emphasize that regions may have varying potential when it comes to using local public goods depending on their level of urbanization. This argument stems from the observation that both supply of and demand for amenities are driven by scale, suggesting that they may create different preconditions for growth depending on the size of regions. The novel finding that built heritage is an important attractor of high skilled labour may strengthen their position in the local land use and the insights is of relevance for cultural policy, pointing towards the need for local governments to engage in preservation activities. 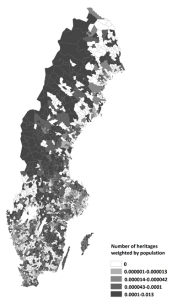