THE POLITICIZATION IN THE SELECTION OF UNESCO WORLD HERITAGE SITES

The UNESCO World Heritage List is considered one of the most successful international systems for the protection of heritage as a global public good. Yet, the decision-making process behind the selection of heritage sites to be included in the List has been recognized to be subject to mounting politicization. In a recent research we document quantitatively such possibility exploring in depth the decisions of the UNESCO World Heritage Committee for the period 2003-2012.

Each year, at the annual session of the UNESCO World Heritage Committee, new natural and cultural heritage properties are added to the World Heritage List for their outstanding universal value for humanity. Since the coming into force of the World Heritage Convention, more than 1000 sites have been added to the List following a specific procedure. Countries propose the nomination of heritage within their borders, experts from advisory bodies provide a technical evaluation of the nomination regarding its outstanding universal value, authenticity and integrity, while the final decision is taken by 21 member states serving the World Heritage Committee. Besides the technical recommendation and decision to inscribe or not to inscribe the property, nominations can be referred or deferred back, implying that the path toward the inclusion in the List will take more years and round of discussion.

While in the past the Committee used to follow more closely its advisory bodies’ recommendations, in recent years the final selection of World Heritage sites has increasingly and systematically diverged from the scientific opinions of the advisory bodies, reaching some years peaks of 70% of disagreement. In particular, except for very few exceptional cases where the final decision has been lower than initial technical evaluations, the overall trend has been to push all decisions toward the category of Inscription. Given such situation, in 2010, even The Economist, reporting on the 34th session of the World Heritage Committee held in Brasilia, signaled that the UN agency was bending its own rules under pressure from member states.

Such a “rush to inscribe” might have different reasons. Being on the List is desired highly by many states since it may bring attention and tourism revenue. In some cases, inclusion has also become a political tool for nations to bolster their sovereign interests, using World Heritage as a pawn in international relations. As a result, we tried to quantitatively investigate whether the selection process of World Heritage sites is driven by countries’ political influence and national strategic interests. This was done by collecting information from the summary records and other official World Heritage Committee documents over the 2003–2012 period and combining it with relevant country-specific political and economic variables.

If the World Heritage decision-making process has become politicized, we expect to find evidence of this phenomenon in two different but related ways. Firstly, a country proposing a site may exert influence on the final decision by the World Heritage Committee. Secondly, regardless of the final decision, the voting behavior of individual Committee members may be influenced by factors and judgements unrelated to the value and quality of the nomination.

We found that in the period of analysis, both political and economic determinants have influenced the final decisions as well as the behavior of Committee members. When nominations initially receive a negative recommendation, the final decision is more likely to be shaped by economic and political factors. For example, a rent-seeking factor such as the relevance of the tourism sector for a nominating nation emerges as a robust predictor of both inscription and receiving an upgraded final decision. More interestingly, while being a member of the Committee does not lead to significant effects, we found evidence of informal influence and corridor diplomacy measured in terms of the size of the delegation participating at the Committee sessions. This factor is particularly relevant as, beyond Committee member states, also other countries may participate as observers to the working sessions. As shown in Fig. 1 a larger national delegation has a significant impact on the likelihood of having an upgraded final decision, in particular when such technical evaluation is a Referral or a Not Inscription.

Figure 1: Probability of upgraded decision according to delegation size and advisory bodies’ recommendation 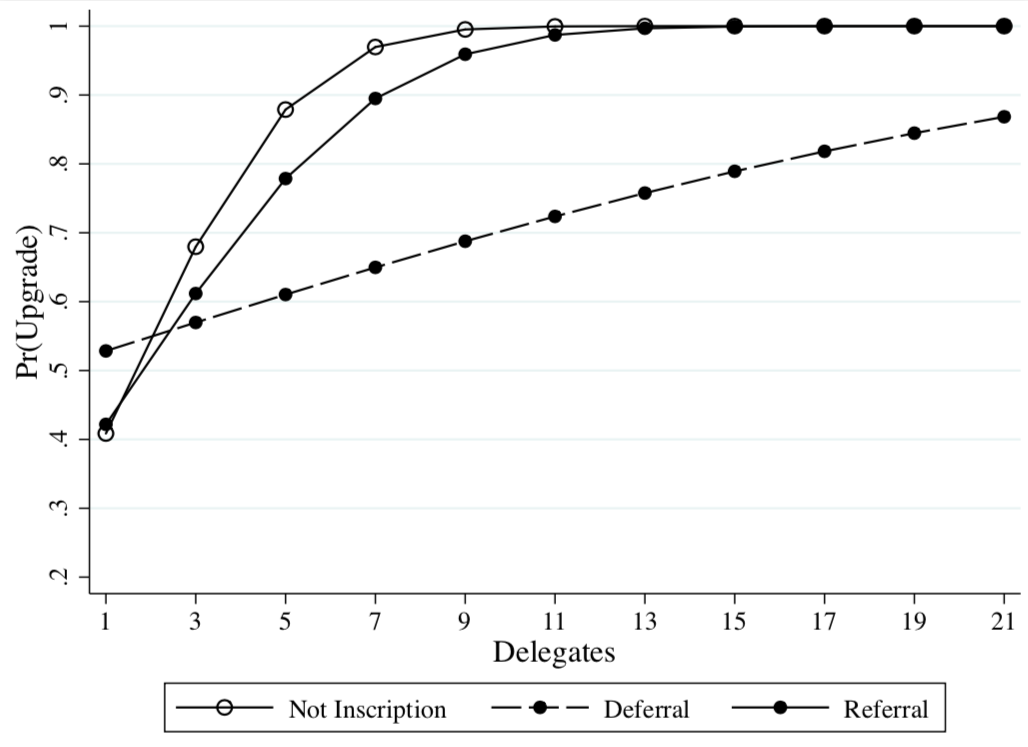 Looking at Committee members’ behavior, close international economic and political ties between countries (measured with bilateral trade and voting alignment at the UN General Assembly) have a positive impact on expressing supportive statements for an upgrade of the initial advisory bodies’ recommendation. At the same time, cultural proximity with and being an ex-colony of a nominating country reduce the likelihood of supportive statements by Committee members.

In summary, the evidence provided confirms that deliberations over the inscription of sites on the UNESCO World Heritage List have reached a level of politicization similar to that of other international fora. The World Heritage Committee is possibly the arena where different views and interests concerning global heritage values and national identities are shaped. In a context where the international order is radically changing with shifts in the balance of power, the selection of World Heritage sites has possibly become one of the most evident fields of contention.

Enrico Bertacchini is Assistant Professor at the University of Torino.

Claudia Liuzza is a PhD candidate in the Department of Anthropology at Stanford University.

Lynn Meskell is Professor in the Department of Anthropology at Stanford University.

Donatella Saccone is Assistant Professor of Political Economy at the University of Gastronomic Sciences.