THE IMPACT OF ARTISTS ON CONTEMPORARY URBAN DEVELOPMENT

Cities have always functioned as focal points of civilisational and economic development, innovation and creativity, enabling regions and countries to uphold or improve their competitive position. Existing theoretical concepts referring to or incorporating artists seem too general and insufficient as full explanations of spatial and entrepreneurial patterns of artists’ activities in the urban space and further research seems necessary. We present a comprehensive edition, including case studies across all Europe.

Much of the world’s wealth is generated and concentrated in cities. They are home to a large and still growing share of the global population. Consequently, according to Glaeser (2011), despite some of their shortcomings, cities continue to maintain their position as places offering the highest quality of life, providing residential, work and leisure space in the most ecologically and economically efficient configuration. The twenty-first century is often referred to as a (new) urban age as we witness the enhanced role of cities as sites inspiring direct human encounters, and hence the exchange of information, new ideas and solution.

According to United Nations, almost three quarters of Europeans now live in urban centres, making them hotbeds of economic growth and new ideas, but also places of concentration of demographic, social, economic and environmental problems. Leaving aside the issue of critiques and apologetics of the city as an imperfect but still ‘the greatest invention’ of humankind, the book is focused on the intersection of urban development – its contexts, factors and pathways as well as the opportunities and challenges facing it – and artists as a singular type of actors and stakeholders of urban change.

Examples of diverse issues linked with the presence and activities of artists in cities tackled in the academic literature have included artists’ multiple roles in the urban economy, the impact of artists and art students on gentrification, artists’ consumption, artists’ location decisions, and the issue of cultural quarters and their historical and current engagement in urban regeneration processes but also in the challenging commercial changes of urban functions and forms. In these areas, artists are presented as a social and professional group which both inspires urban change and exerts an impact on urban functions, image, economy, and social and cultural milieu, but may also be a tool or, worse, victim of urban transformations.

Still, the existing theoretical concepts referring to or incorporating artists, including the very popular but equally controversial creative class concept of Richard Florida, seem too general and insufficient as full explanations of spatial and entrepreneurial patterns of artists’ activities in the urban space or the context and complexity of their impact on urban centres and particular quarters within them. Further research on the issue seems necessary and worthwhile in order to furnish a holistic and comprehensive understanding of artists as a specific socio-economic and professional group contributing to urban change, including their potential to help cities deal with the numerous contemporary challenges of urban development.

Taking into account the potential spheres of impact of artists on cities, the diverse roles played by artists as potentially important actors and stakeholders in urban settings were taken into consideration. Artists may exert an impact on the economic, social, cultural and ecological aspects of urban development in roles including producers of cultural goods and services; employees and entrepreneurs in the creative sector and other sectors; co-operators with service and production firms and institutions representing the public, private or non-governmental sectors; urban social, ecological and political activists; creators and interpreters of urban heritages, identities and memories; inventors of cultural trends and phenomena or contesters and protestors against them; and pioneers and leading actors in the processes of urban regeneration and gentrification, initiators of new, long-term or temporary uses of urban space, and promoters of new approaches to urban development and planning. As residents of the city, they are also consumers of urban amenities, buildings, services and sites. 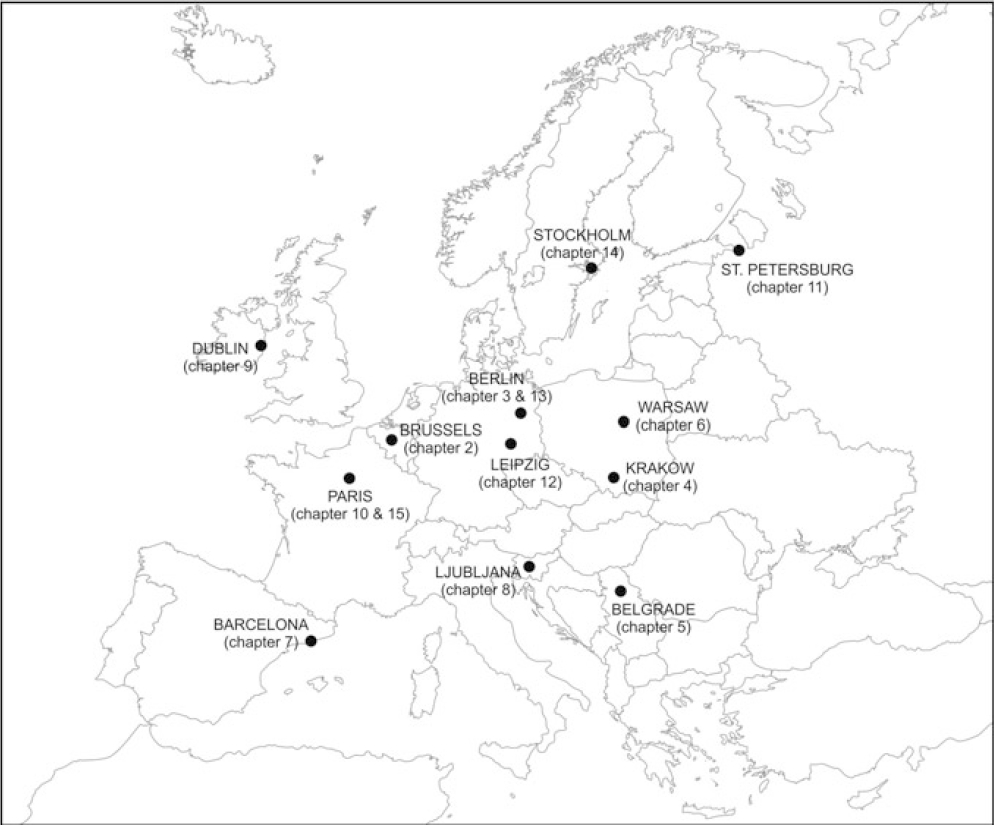 The first part of the book focuses on exploration of the main questions linked with artists’ presence in cities, such as clusters and concentrations of art institutions and artists, and their links with urban regeneration, gentrification and interpretation of heritage. The authors of the chapters in this section consider the various ways artists and cultural activities agglomerate and whether they indeed have a tendency to concentrate in selected parts of cities, as well as the question of who stimulates and benefits from associating artists and artistic activities with particular areas.

In the second main section of the book less often mentioned, more recent or less obvious roles of artists or their potential contribution to urban development are discussed in the context of their impact on temporary uses of urban space and broader involvement in urban planning and fostering new governance models.

This part of the volume includes a study of the pop-up Granby Park in Dublin, reflections on the use of street art in Paris, referring to the case of the ‘Paris 13 Tower Exhibition’ organised in 2013, a study on the importance, value and context of bottom-up artistic initiatives in changing a city’s creative milieu in the post-Soviet context, a study on what attracts artists to a post-socialist city which has experienced economic decline and shrinkage in the decades following the fall of the Berlin Wall, and new, increasingly important strain of literature on the presence of artists in cities, i.e. their potential and actual involvement in urban planning processes, using the example of Stockholm and an account of the experiment of collaboration between artists and urban planners, intended to broaden the planning perspectives of the latter, undertaken in a Parisian suburb.

The book examines a variety of urban contexts, scales and issues linked with the presence of artists in urban centres. Although understandably not all the issues mentioned above have been tackled by the authors of particular chapters in their analyses of specific aspects of artists’ impact and presence in cities, we hope it may nonetheless shed some new light on the intricacies of the links between artists and cities, as well as contribute to the timely, broader discussion on the role of creativity and culture in urban development.