SOMEBODY MUST KNOW SOMETHING!

By John Sedgwick and Mike Pokorny 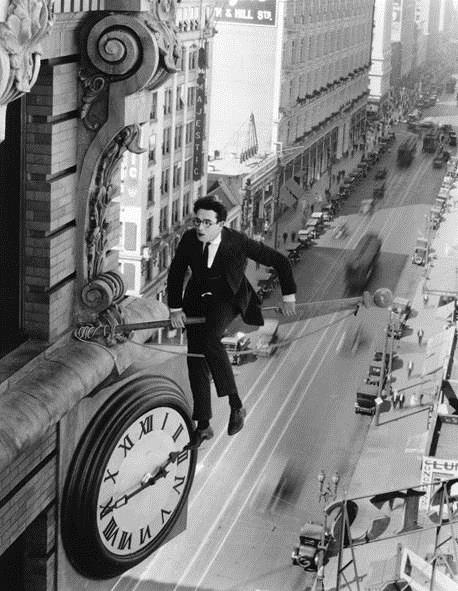 William Goldman, the screenwriter of Butch Cassidy and the Sundance Kid, posited that ‘nobody knows anything’ about the financial risks associated with the film industry, elevated by the Harvard professor Richard Caves to the ‘nobody knows’ principle.  Our research suggests otherwise: analysis of the tremendous economic success of film studios over the past 100 years suggests to us that film making is not such a risky business and that somebody would seem to know something!

For the past 20 years we have been researching the business and economic history of the movies. Our published research suggests that from the 1920s onwards, a number of empirical regularities characterise the industry. These are:

Probably the most frequently quoted piece of wisdom concerning the financial risks associated with the film industry is the remark made by the screen writer William Goldman that ‘nobody knows anything’, elevated by the Harvard professor Richard Caves to the ‘nobody knows’ principle.[1]  Arthur De Vany and David Walls in their path breaking 1996 Economic Journal article make use of Goldman’s insight in developing a paradigm of extreme uncertainty, represented in their claim that the probability of forecasting film revenues is governed by infinite variance.[2] The implication of the principle is that investors can have no hope of picking winners, and as a consequence the financial returns to films are largely unpredictable. Our intuition is different, starting with the simple observation that Hollywood (conceived as a highly concentrated oligopoly) has been prominent in world markets for very nearly 100 years. This suggests that somebody would seem to know something!

Our point of departure with most analysts of the film industry is two-fold. First, rather than individual films, our unit of analysis is the portfolio of films produced by the major studios in general, and individual studios in particular – we assume that studios pursue the strategy of maximizing profits across the portfolio. Second, the costs incurred in producing films that generate multiple revenue streams should be spread across those streams and not attributed to theatrical release. Of course, before the 1950s there was only one source of revenue – that arising from theatrical release. However, from the moment that movies were first broadcast on television, a secondary revenue stream was opened up for film distributors. Since the 1950s the stream of revenue from non-theatrical release has expanded to the point where today some 80 per cent come from sources such as digital streaming, DVD sales and rentals, and television broadcasting.[3] However, for the most part analysis of the film industry is undertaken through the filter of earnings from theatrical release, and often restricted to the North American market.[4] In our 2010 paper published in the Economic History Review, we developed a framework of analysis that accounted for both non-theatrical revenue streams as well as foreign revenues. Our results show that during the 1990s film production was much more profitable than earlier periods in film history, particularly with respect to big budget films. Indeed, we found that in the 1930s almost all big budget films lost money for their studios. By extending our analysis to 2009 it is clear that profitability since 2000 has increased dramatically.

Figure 1 captures the essentials of the of risk environment of film production for the period 1988 to 2009. High budgets cannot guarantee high profits, but rather drive an environment in which profitability is highly variable.  A further aspect of Figure 1 is that the high budget/high profit films appear to be dominated by films produced in the latter half of the data period, with a high proportion of these being sequels. 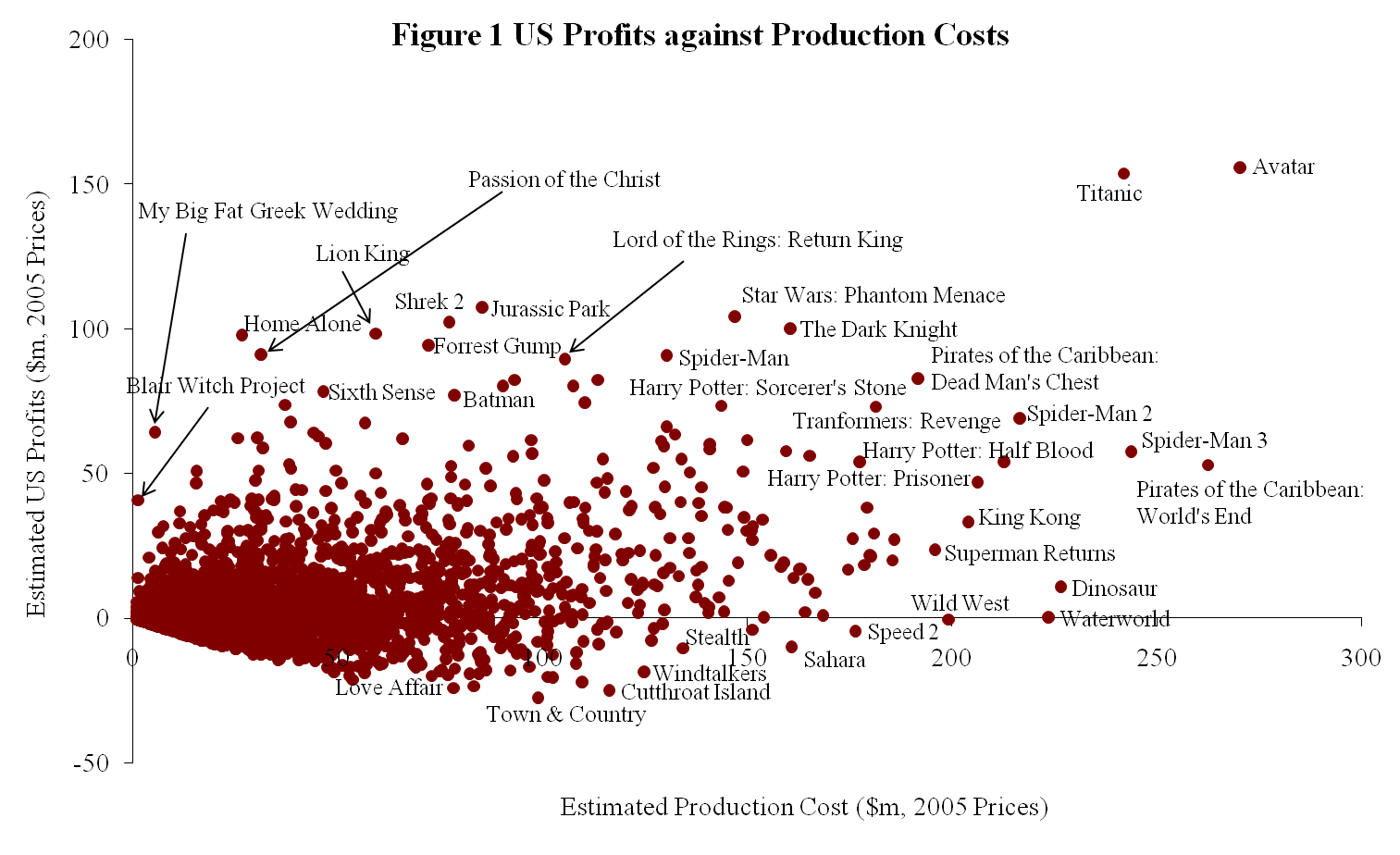 Based upon the returns of over 70 per cent of films released by the major Hollywood studios for which we have production cost estimates (accounting for 85 per cent of total US box-office), Figure 2 shows the strong profitability performance of these studios from 2000 onwards, where annual rates of return increase consistently (apart from relatively poor performance in 2004), commensurate with an increasing proportion of film outputs that were profitable.  Indeed, by 2009 remarkably 90 per cent of the films released by the majors could be interpreted as having been profitable.  This performance stands in stark contrast to the performance in the first half of the data period, where annual rates of return were comparatively low, volatile, and typically less than half of film outputs achieved profitability. The performance post-2000 can be seen, historically, to represent a break with the past. 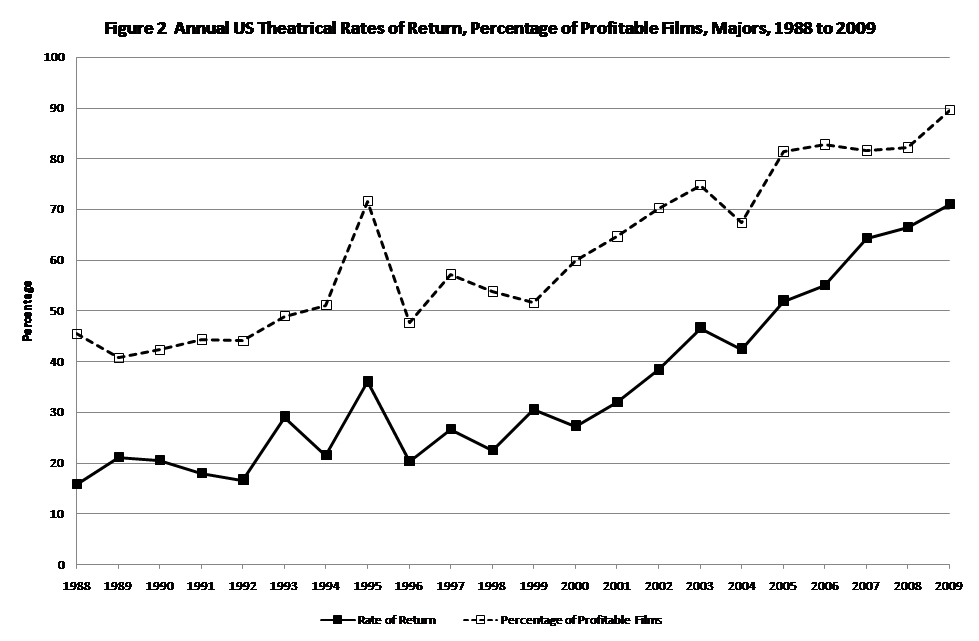 Extending this analysis to the major studios – Disney, Fox, New Line, Paramount, Sony, Universal, Warner Bros. – shows that all of them were profitable over the period, collectively generating rates of return on their portfolios of 34.4 per cent on average production budgets of $43.3 million. These are very high returns across respective portfolios and do not appear to depict the kind of radical uncertainty suggested in the Goldman epigraph.

This article based on:

John Sedgwick is a Professor at the Portsmouth Business School, University of Portsmouth, UK.