RELIGION AND CULTURAL PARTICIPATION: WHAT THE EVIDENCE SHOWS 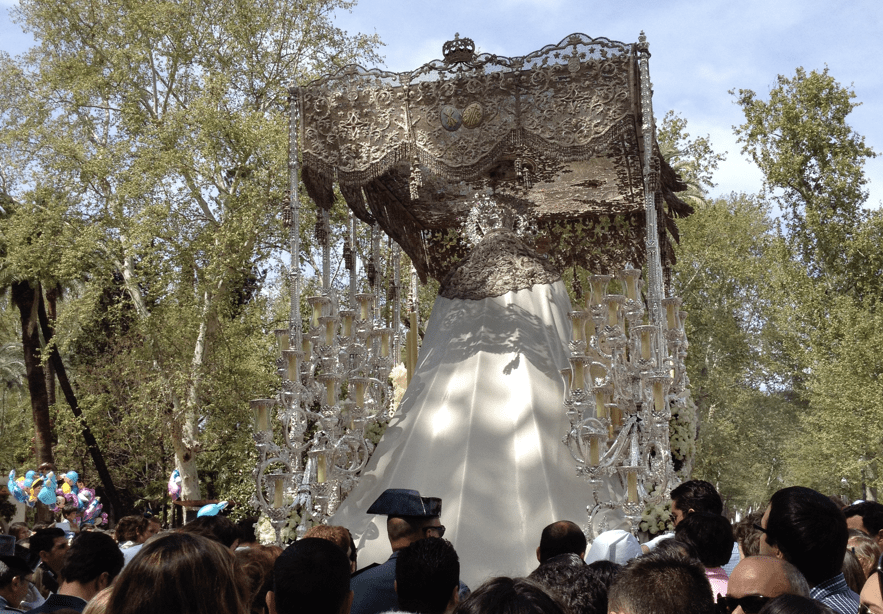 Consumer behavior theory is no stranger to the introduction of the moral norms and constrains that arise from the spiritual and religious dimension of individuals. In this respect there is a growing literature on ethical consumption behavior, or the implication of spirituality on materialism and consumption to mention two. Still, the role of religion on cultural consumption has been analyzed in a rather restricted way, as most of the research resorts to a one-dimensional approach to religion: religious affiliation, frequency of church attendance, or scales of religious intensity (from secular to strict observance) have been common proxies used in the literature.

As an illustration of this sort of studies, Katz-Gerro (1999) finds a positive association between church-going and highbrow cultural participation, while Katz-Gerro, Raz, and Yaish (2009) find religious intensity to be negatively associated with cultural consumption. Leaving aside methodological and data differences, both explanations, while plausible, may refer to different aspects of religion. The former, reflects an individual’s propensity to social participation (either in church or the arts) or, as Azzi and Ehrenberg, (1975) put it, a functionally-driven aspect of religion: consumers derive from church attendance as it allows them to build up social relations and strengthen networks. The latter, could point to a substitution effect between arts and religion.

To further investigate the role of religion on cultural consumption, and using data from the 2002 wave of the General Social Survey (Davis et al., 2002), we estimate a model in which live performing arts participation (music, dance and ballet, opera, theater, pop music) and movie-going are explained by the usual suspects (socio-demographics, income, education, and place of residence as a proxy of quality and quantity of the cultural supply) plus individual’s religiousness.  Arts participation time frame refers to the 12 months prior to the survey and, not surprisingly, lowbrow activities show higher participation rates (73% for movie going, and 43% for pop music) than highbrow ones (28% for theater, 23% for dance, and 18% for classical music and opera).

As for religiousness, we gauge it by resorting to five different measures: (1) frequency of church attendance; (2) participation in church activities; (3) frequency of prayer; (4) strength of respondents’ observance of her religious affiliation; and (5) degree of fundamentalism. Using multivariate statistical analysis we summarize these five measures in two factors, or latent individual traits, that we identify as two dimensions of religion. The first one is labeled as religious participation as it is most strongly related to those items linked to a sense of belonging and channel the building up of social relations with individuals with a similar mindset: church attendance and participation in church activities. The second one is positively related to the intensity of individuals beliefs and faith (frequency of prayer, strength of beliefs and fundamentalism), hence the label intensity of beliefs. Each individual in the sample is attached to a score in both dimensions, which, we assume, influences decision-making.

Figure 1 provides a graphic summary of the relation of the two religiosity scores and live arts participation. Individuals are classified according to their pattern of cultural consumption as inactive (did not participate in any manifestation), lowbrow (pop music and/or movie going only), highbrow (classical music and opera, and/or theater, and/or dance only), and omnivorous (both highbrow and lowbrow). Average scores for religious participation and intensity of beliefs are given for individuals in each category. Highbrow and omnivorous consumption seems to be related to high positive scores in religious participation and negative scores in intensity of beliefs. Interestingly, the opposite findings are observed for inactive and lowbrow consumers. 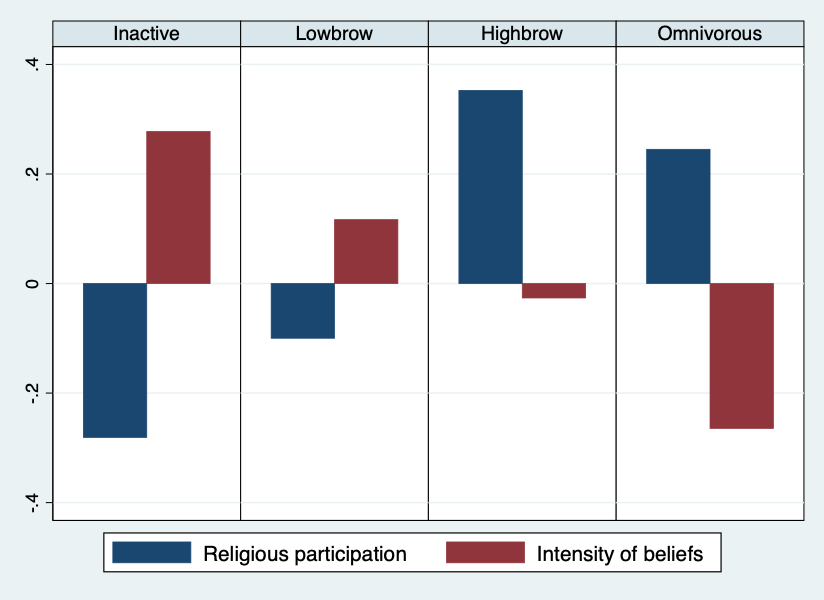 Results show that the two dimensions of religion affect cultural participation in a different way. Religious participation enhances the probability of attending a classical music concert or opera, or going to a theater performance, while marginal but nonetheless positive on dance and movie going.  On the other hand, intensity of beliefs, significantly plays against participation in classical music and opera, dance and ballet performances, while marginally reducing the probability of attending theater and pop music.

How to interpret the apparent conflicting findings? As already mentioned, a functional view of religion supports the positive effect of religious participation on most cultural manifestations. If an individual sees religion as a means of socialization and networking, there is an unobserved trait related to propensity to social participation that might confound results, suggesting a disposition to be socially engaged that could well be extended to other activities, such as the arts or sports. In other words, religious participation measures the building up of relations, and individuals that score high in it do also show a tendency of participating in the arts, suggesting a complementarity between both forms of participation.

However, the effect of intensity of beliefs suggests that a stronger attachment to a set of religious beliefs decreases participation in most manifestations. In this case, religiosity crowds out participation in the arts. The rationale underlying this could be twofold. On the one hand, the symbolic nature of cultural consumption as a means of self-expression and group membership could conflict with a strong sense of religious attachment. In this respect, hedonic consumption might be at odds with spirituality and the strict observance of a religion. On the other hand, an individual’s structural constraints and the economizing nature of behavior could underlie the evidence. In this respect, and being religion and arts participation time intensive, one must acknowledge that individuals face time constraints that could be reflected in actual choices: the more one is committed to a religion, the less leisure time will be available for alternative activities (including cultural ones). In any case, the foregoing suggests that multiple dimensions of religion have to be considered to understand their effects on arts participation.

Juan D. Montoro-Pons is Associate Professor in the Department of Applied Economics at the Universitat de València.

Manuel Cuadrado-García is Associate Professor in the Department of Marketing at the Universitat de València.