LEONARDO IN LIMBO: AN ECONOMIC EVALUATION 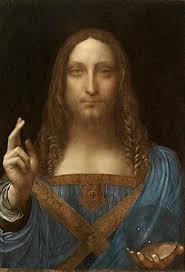 Interest in recent art “discoveries” and attributions is at high pitch. Most starling has been a “new” Leonardo initially sold for a modest price in a regional New Orleans auction house then only to become the most expensive painting ever sold at auction at almost half a billion dollars. Attributions are changing constantly depending on a consensus of “experts,” with changes motivated by new evidence or connoisseurship as in the case of a recent Rembrandt attribution. But for some of these works, expert opinion substitutes for falsification. That is an issue for Da Vinci’s Salvator Mundi and it can be related to the economic nature of certain goods.

Economists, for more than a century, have examined the nature of goods and services, dividing them into those with little or no costs of determining quality and authentication (search and experience) to those with high costs to consumers (credence goods) of determining quality. The latter case opens wide the possibility of fraud. We argue that some art is not only a credence good but that it is a meta-credence good where authenticity cannot ever be falsified by any practical or cost-effective means. The likelihood of fraud in these cases is greatly enhanced.

We model the decision matrix of the art expert in this paper since much art verification depends on the role of experts, Expert opinion depends on a variety of factors, including real evidence such as diaries, contemporary commentary, inclusion in a catalogue raisoneé and long-time familiarity with the artist or works of the period. Sometimes the evidence is scant, and the expert must attach some probability of authenticity even in the case of recently deceased but, more often, by long-deceased artists. The expert’s decision process may be depicted in Bayesian terms where the expert attempts to avoid both Type I and Type II errors. The expert might fear a loss of prestige or a lawsuit and financial liability by labeling a painting fake when it is actually “right” or “autograph.” Or she might do the opposite to curry the favor of art dealers or clients by labeling a painting as authentic when it is a fake. The result is that levels of credence and a probability of authenticity is always attached to such paintings. In the extreme, as in the case of Da Vinci’s Salvator Mundi, there is no solid, refutable evidence that the painting is by the master and miniscule probability that there will ever be any such evidence.[1]

The picture has undergone extensive examination. The National Gallery assembled a term of “experts” and attribution was given to Da Vinci. Some of the foundation was the superiority of the painting to other depictions by his students, similar stylistic factors to other works by Leonardo, draperies that were similar to drawings in Queen Elizabeth’s collection and that the misrepresentation of the orb in Christ’s hand was a deliberate mistake by Da Vinci. The painting also passed scientific analysis (consistent pigments, brush strokes, etc.) conducted by Nica Rieppi from Art Analysis & Research. These experts were cited by Christie’s when the record-breaking picture went to auction in 2017.

But was the painting executed by the master’s hand? All experts admit that it was extensively repainted through the centuries. Some who think Leonardo painted the picture admit that only a percentage (as low as 5 or less percent) was painted by him. However, an important group of art historians believe that it is by Boltraffio or in the “studio of Leonardo” (that is, by one of his students). Nay-sayers include Oxford art historian Matthew Landrus who thinks da Vinci’s assistant Bernardino Luini painted most of the picture. Among others denying execution of any significant portion of the picture to Leonardo are Jacques Franck, a French Leonardo specialist, Carmen Bambach, Metropolitan Museum of Art specialist in Italian Renaissance art, and, perhaps most importantly, Frank Zollner, author of the catalogue raisonné of da Vinci.

While there is new research underway that may alter opinion, a sizable group of “experts” cast doubt on the authenticity of Salvator Mundi. Scientific correspondence with Leonardo’s materials and style does not constitute proof. The drawings of drapery that correspond to the painting but that does not prove that Leonardo painted it. Otherwise documentary evidence is nonexistent, and all evidence is non-refutable. Refutable evidence may yet appear, but the picture is now a meta-credence good with a low or non-existent probability of authenticity. The situation, we argue, is the same for many paintings we might label meta-credence in character.

Truth does not always “out” especially in an increasingly opaque, chaotic and “wild-west” art market where, as the late Thomas Hoving opined, 30 or 40 percent of art traded in the market is fake or mal-attributed. Much art, including the Da Vinci, is meta-credence in nature. As Ben Lewis put it in his The Last Leonardo, “Short of a miracle, the Salvator Mundi will find itself floating forever in a Sisyphean limbo, where efforts to climb the summit of art history and authenticate it permanently as a Leonardo are eventually, ultimately, inevitably doomed to fail.” Never has the admonition caveat emptor been more applicable. The economic designation “meta-credence good” makes that clear.

[1] In this sense some art is like religious promises of “eternal salvation.” No one has ever returned to provide evidence and “proof” must take other forms.