HOW LIBRARY SERVICES HAVE ADAPTED TO NEW CHALLENGES?

Which transformations have libraries undergone in recent years? In this paper we claim that, due to new societal challenges and digitization, these institutions have undertaken huge transformations that can be examined looking at the way these institutions are conceptualized and measured through statistical instruments. Using data for the last 15 years in Spain, we show how access to libraries is conceived at a given point in time, and how different functions emerge and evolve to catch up with new realities. We describe the composition and changing patterns of usage, as well as of users’ motivations.

After the era of huge investments in expensive and spectacular cultural infrastructures, it is worth taking some time thinking about more humble but available cultural equipment in people’s everyday life. Libraries are well-distributed cultural facilities that respond to community needs. The analysis of the four editions of the questionnaire of the Survey on Cultural Habits and Practices in Spain (2002–2003, 2006–2007, 2010–2011, and 2014–2015) reflects the changing role of libraries; a change that has gone hand in hand with technology developments and trends in society.

Along with a significant body of literature, the evidence presented in this paper supports the view that a transformation has taken place in libraries, from being places for quiet work, study and lending books, to meeting spaces for socializing, sharing and active life-long learning. At present, public libraries are far more than a place for borrowing books or multimedia products; they are a place where users are active, rather than passive recipients. In response to technological forces, but also to the changing expectations of society, libraries have increased the ways in which they serve their users. They provide a growing range of services, such as those designed for ethnic minorities, children and the elderly, and virtual access to catalogues or newspapers, in an attempt to reach everybody.

Most of these new services have been included in the editions of the survey, but some of them are still not sufficiently covered. Those included could be assimilated to the ‘collection library’ (as defined by Levien, 2011) which in its real or virtual form serves the traditional role of libraries by providing free, ready access to its collections. Since the 2006–2007 edition, libraries have also been considered a place where people interact and socialize. However, the idea of the ‘creation library’, also in Levien’s words (2011), is still under-developed in the survey. This idea can be found in research that considers the role of libraries in teaching people how to use high-tech gadgetry like 3D printers that enhance co-creation (for example, Horrigan, 2015). Consequently, the instrument does not include yet the users’ perception of a place where media convey information, and where knowledge, art and entertainment are created using the library’s specialized equipment and facilities.

The different editions of the survey have also allowed us to describe the composition and changing patterns of usage, and then analyse user expectations and motivations. The analysis of indicators of physical access has showed that the profile of users remains fairly constant. First, as regards to gender, the proportion of women who visited the library is systematically higher. Second, the practice of visiting the library decreases with age; the highest proportion of visitors was found in young people aged between 15 and 19, suggesting that libraries are still seen as spaces and resources linked to formal education. Third, a relatively stable pattern of visitors by type of living arrangement was found. The highest proportion of visitors was from the category ‘unmarried living with parents’, followed by ‘married or cohabiting individuals with children under the age of 18’. Fourth, in all four editions of the survey, there is a positive trend in almost all the indicators considered, meaning there is an increase in the use of the new library services. 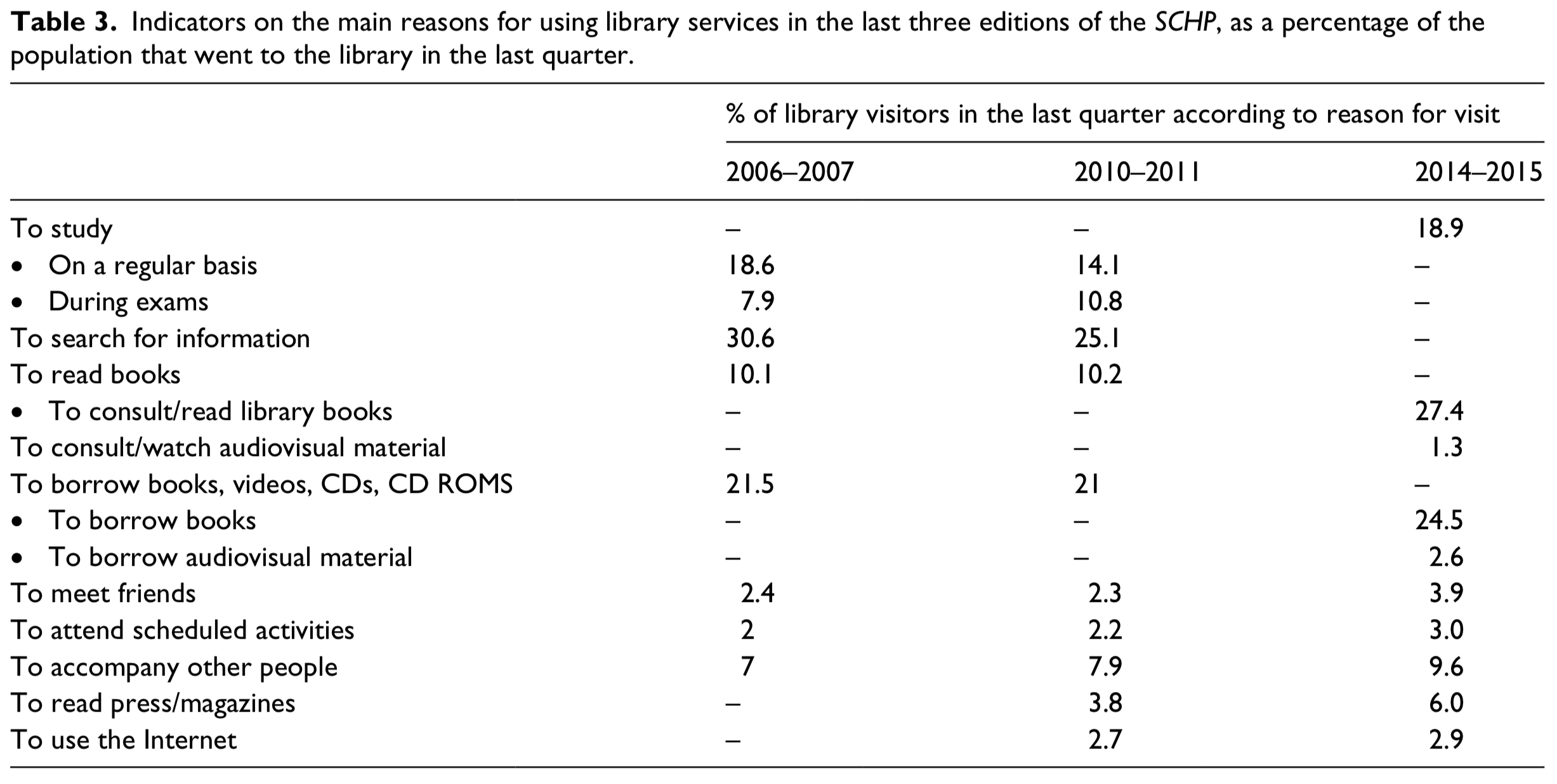 However, changes were found in the way ICTs are used in library services, and in the profile of library users, especially during the last edition (2014–2015), revealing a change in access to library services via the Internet. First, access to libraries through the Internet decreased in the last edition, while physical access continued to grow. One possible explanation for this unexpected result could be the increasing digitization of catalogues and funds that are available on the Internet and can be accessed not only through digital libraries, but also through portals and, more importantly, through Wikipedia. Second, for the first time, a higher proportion of women accessed library services via the Internet compared to men. Third, the 20–24 age group, which continued to have the highest percentage of Internet access over the whole period, was the only age group, along with 65–74 year old group, that showed a slight increase in access during the last period.

The paper concludes identifying the considerable scope for future analysis due to the huge amount of data on library services provided in the latest editions of the survey. Such quantitative analyses could help guide funding and political decisions by shedding light on people’s expectations of libraries and their current patterns of use. Further research could also contribute to the discussion of how much or how little public provision of cultural infrastructure should be provided in the future and, more relevant, where (Evans, 2016).

Anna Villarroya is Associate Professor in the Department of Economics at the University of Barcelona.

Victoria Ateca-Amestoy is Associate Professor at the Department of Economic Analysis II at the University of the Basque Country (UPV/EHU).