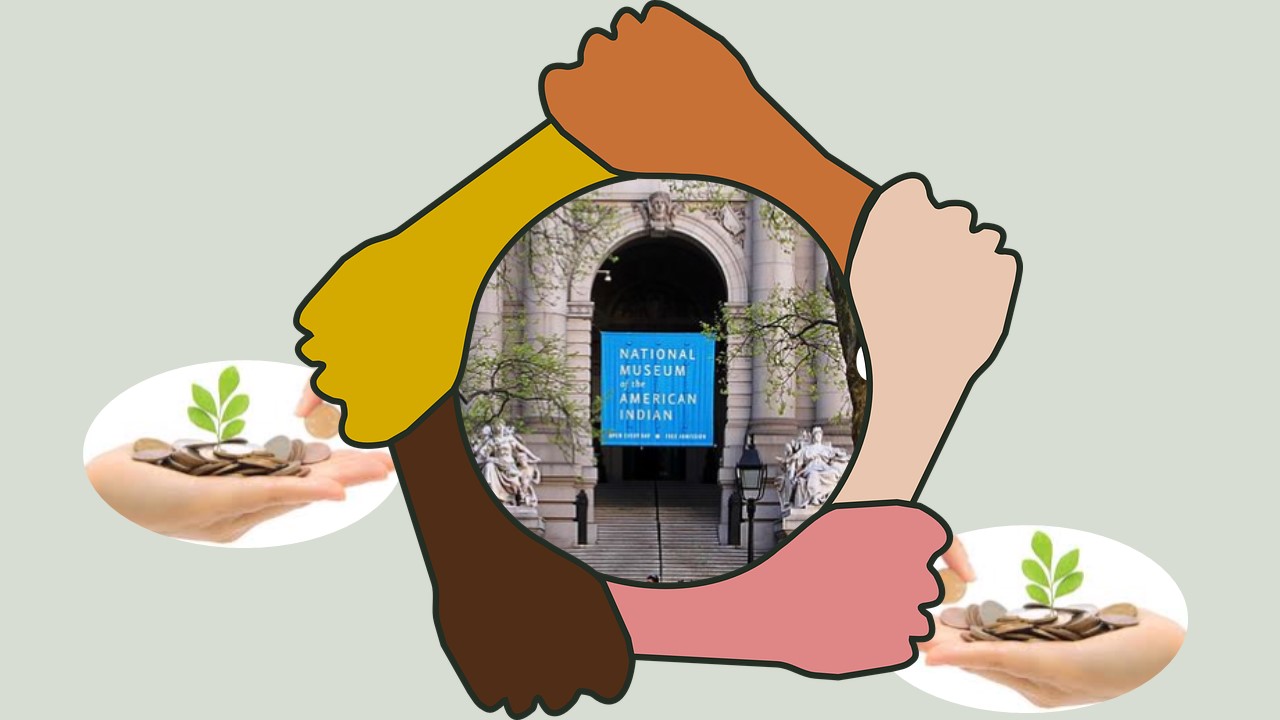 With public funding for the arts decreasing, fundraising is becoming more vital—especially for museums where contributions comprise most of their revenue. However, traditional fundraising models, relying heavily on wealthy, white, well-educated donors, is less effective, excluding many perspectives and people. Museums need more inclusive fundraising to continue to thrive.

Museums are currently getting about 40% of their operating revenue from private donors, including individuals, private foundations, and corporations while the rest comes from government agencies, earned revenue (e.g., admission charges, restaurants, and rental income), and investment income (Bell, 2012). However, as public funding is decreasing, museums have relied on traditional fundraising strategies to maintain or increase their contributed income. These strategies focus on wealthy and generally white patrons, a shrinking demographic in the changing United States. According to the most recent United States Census (2011), at least one-third of the population is racial minorities. This growing minority population has not been active participants of mainstream philanthropy, not because they do not have traditions of giving, which they do, but because they have been largely ignored by mainstream fundraising (Newman, 2002). This traditional fundraising model creates a vulnerable financial situation for museums: their donor base is shrinking and there is more competition for these donors. Therefore it is even more difficult to raise funds in times of economic downturn or when existing donors shift their giving patterns. This means museums need to rethink donor profiles and reach out to more nontraditional museum donors and involve their broader communities more in their fundraising practices (Perman, 2014). By diversifying their revenue sources and focusing more on legitimizing and communicating their values to the community, it will make them financially more sustainable in the long-term (Carroll and Stater, 2008; Lindqvist, 2012).

The theory of the commons can help explain why museums need to move toward more inclusive fundraising models. Lohmann (2003, 2012) defines commons as shared resources, which includes nonprofit arts organizations, sustainably managed by community members. The theory explains that nonprofit organizations exist because there are goods and services that the government or for-profit firms will not produce. Thus, arts are common goods and must be funded by local people and used and managed in a way that matters to people in the local community (Ostrom et al., 1999). If not, it creates the tragedy of the anticommons (Heller, 1998), where art is used by only a handful of community members. When art museums cater to and are mainly funded and governed by a few powerful people in the community—who often do not represent the community where the museums are located—access to art by the public is limited. This creates an arts drain effect, where most community members do not get to have experiences with the arts. This happens in many places where arts museums are seen as elitist and/or used by a few people from its community who tend to be wealthy, white, and well-educated (Farrell and Medvedeva, 2010). As long as art museums are common-property institutions (excluding for-profit or privately owned museums), they should be accessible by all local members based on agreed community practices.

A powerful way to make sure museums are both useful to the whole community and funded is to use a relationship-based fundraising approach (Kelly, 1998; Waters, 2010). This allows museums to build relationships with its entire diverse communities. Relationship-based fundraising cares more about developing relationships with broader community members who can be future donors and supporters (Kelly, 1998; Waters, 2010). This paradigm shift can happen in many ways but I’ll introduce three approaches. First, it can happen through internal changes by diversifying fundraising professionals and board members (currently they are mostly white) to include representation and participation from a wide variety of community groups. Kelly (1998, p. 86) said, “if the fund-raising profession hopes to interact effectively with the evolving diversity of philanthropy, the profession itself is going to have to work harder to diversify its ranks.” Second, art museums should understand different giving patterns of diverse communities. Perry (2012) theorized that existing fundraising strategies (e.g., asking for donations through personal connections) can be uncomfortable for many diverse racial and ethnic groups as some may feel shameful asking their personal connections to donate money to charity. In addition, they often do not have access to “well-to-do” donors and feel that the traditional fundraising strategies and training are designed with embedded white cultural preferences (Perry, 2012). Lastly, arts museums can focus on alternative methods to raise funds. Gelles (2014) mentions that “instead of relying on a handful of major donors to carry the museum each year, many are trying to nurture an ‘Obama fund-raising model’—smaller donations from a vastly larger audience” (Boeuf, Darveau, and Legoux, 2014). This method, also known as micro-fundraising (Chung, Marcketti, and Fiore, 2014), may not be successful at raising a large amount of money initially, but it creates opportunities for a wide variety of people to feel connected to the organization, a first step to building sustainable relationships (Boeuf, Darveau, and Legoux, 2014).

Fundraising from diverse publics and perspectives could guarantee museums’ future survival. With changes in demographics and giving patterns, especially during times of economic stress, museums that are not communicating well with their diverse local audiences are not likely to survive. On the other hand, when museums are inclusive and sensitive to local arts needs and interests, a wide variety of people will both appreciate and understand the value of the arts. In doing so, many become donors and supporters for the long term, thereby ensuring that museums can fulfill their missions well into the future.

Jung, Yuha (2016): “Theoretical Understanding of and Suggestions for the Current Fundraising Practices of Nonprofit Art Museums.” The Journal of Arts Management, Law, and Society, 45 (4): 255-268.

Bell, Ford W. 2012. “How Are Museums Supported Financially in the U.S.?” Embassy of the United States of America.

Lohmann, Roger A. 2003 (June 21). “The Commons: Our Mission If We Choose to Accept It.” Nonprofit Quarterly. https://nonprofitquarterly.org/policysocial-context/102-the-commons-our-mission-if-we-choose-to-accept-it.html

Lohmann, Roger A. 2012. “And Lettuce is Nonanimal: Toward a Positive Economics of Voluntary Action.” In The Nature of the Nonprofit Sector, edited by J. Steven Ott and Lisa A. Dicke, 158–65. Boulder, CO: Westview Press.

Waters, Richard D. 2010. “The Value of Relationship and Communication Management in Fundraising: Comparing Donors; and Practitioners’ Views of Stewardship.” PRism, 7 (1): 1–14.

Dr. Yuha Jung is an Assistant Professor of Arts Administration at the University of Kentucky. She is a devoted arts educator, museum scholar, and qualitative researcher. She holds a BFA in painting from Yeungnam University in South Korea, MA in Museum Studies from Syracuse University, MPA from University of Georgia, and PhD in Art Education from the Pennsylvania State University with an emphasis on museum education and management.