FLAMENCO AND COPYRIGHT. THE CASE OF CAMARÓN DE LA ISLA 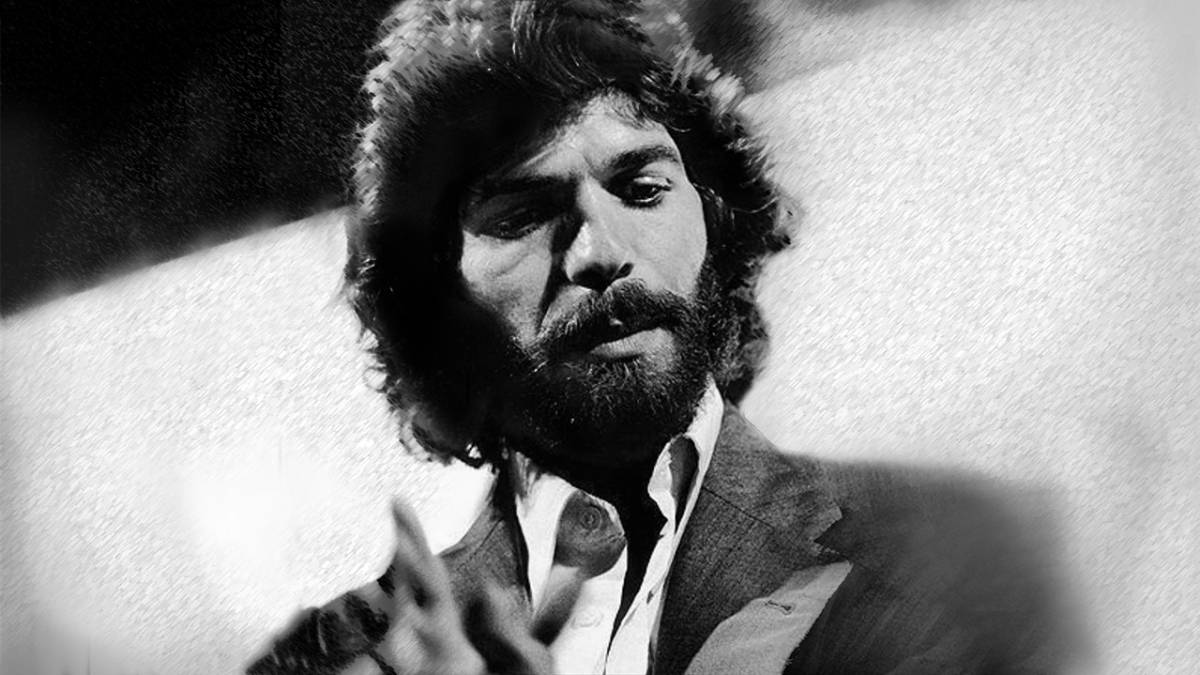 This article analyzes the gap between the performer’s contribution to the flamenco work and the protection he/she obtains. We designed a methodology based on interviews with flamenco personalities and surveys of flamenco market agents which enabled us to obtain an approximation to the cultural valuation of the contribution of the three elements that constitute the flamenco work: palo (cultural heritage), author and performer. For the 25th anniversary of his death, we present a representative case focusing on the figure of Camarón de la Isla.

»As the artist left the room, one could hear the agitation and excitement that came from the auditorium. When the curtain opened and appeared on stage, the audience was silent, the artist sat in his chair and suddenly arose with a Soleá called »Saludo es lo que yo quiero«. The public was paralyzed; when the singer finished, they raised to clap in the midst of ecstasy. They did not know that this would be his last performance«. (Marcos, 2010, November 24).

The article focuses on the figure of Camarón de la Isla, commemorating the 25th anniversary of his death. Camarón is considered one of the best singers in the history of flamenco. A few weeks before his death, in his last televised interview, there was a reference to the situation about the rights of author who did not own the works in which he participated. With that, there is a problem of legal repercussions – question of the validity of firms recognized as authors of songs – greater labor protection is claimed of the creative and cultural performer with little official and industrial interest for the distribution of rights to the work of a recognized artist as unique (Connolly and Krueger, 2006; Heredia-Carroza, Palma Martos and Aguado, 2017; Towse, 2010).

To do this, first, we analyze the documents of the intellectual property law in the Spanish legal system, then check the originality standards used by other European states and the United States for protecting creative work. Second, we present the process of creating the musical work of flamenco, whose main arguments are heritage, author and creative performer, using existing bibliography and interviews conducted with personalities from the world of flamenco. Third, the figure of the performer is valued through surveys of three agents of the flamenco market: fans, critics and managers of cultural spaces. Finally, the case of Camarón de la Isla is studied in detail, with information used from the interviews conducted with him and a study of the listeners of his performances on the YouTube digital platform.

The article presents a methodology to research flamenco, which may be applicable to other types of traditional popular music that is characterized for its orality and the importance of the performer in its creative process. This allows the identification of agents involved and the subsequent measurement of cultural value contributed by each one. The performer with his contributions leaves characteristics distinctive to the flamenco musical work that, once externalized, is considered as unique. Such performance could be imitable, but never may be reproducible due to the characteristics unique to the performer who performed it. These characteristics (improvisation, technique or ability to thrill) can be synthesized in the concept of originality (Heredia-Carroza, Palma Martos and Aguado, 2019b).

The application of current copyright protection instruments in traditional popular music creates different levels of protection, causing an gap in the market. This gap negatively affects the performer, since the elements contributed by him are protected by neighboring rights, which have low coverage. The result of surveys of amateurs and experts confirmed that the market identifies the cultural value contributed by the performer. As it has been proven with the case of Camarón de la Isla, the interest towards the works by the market grows when a subject with high individual creativity or a lot of talent interprets them. Figure 1 sumarize all the collected information. 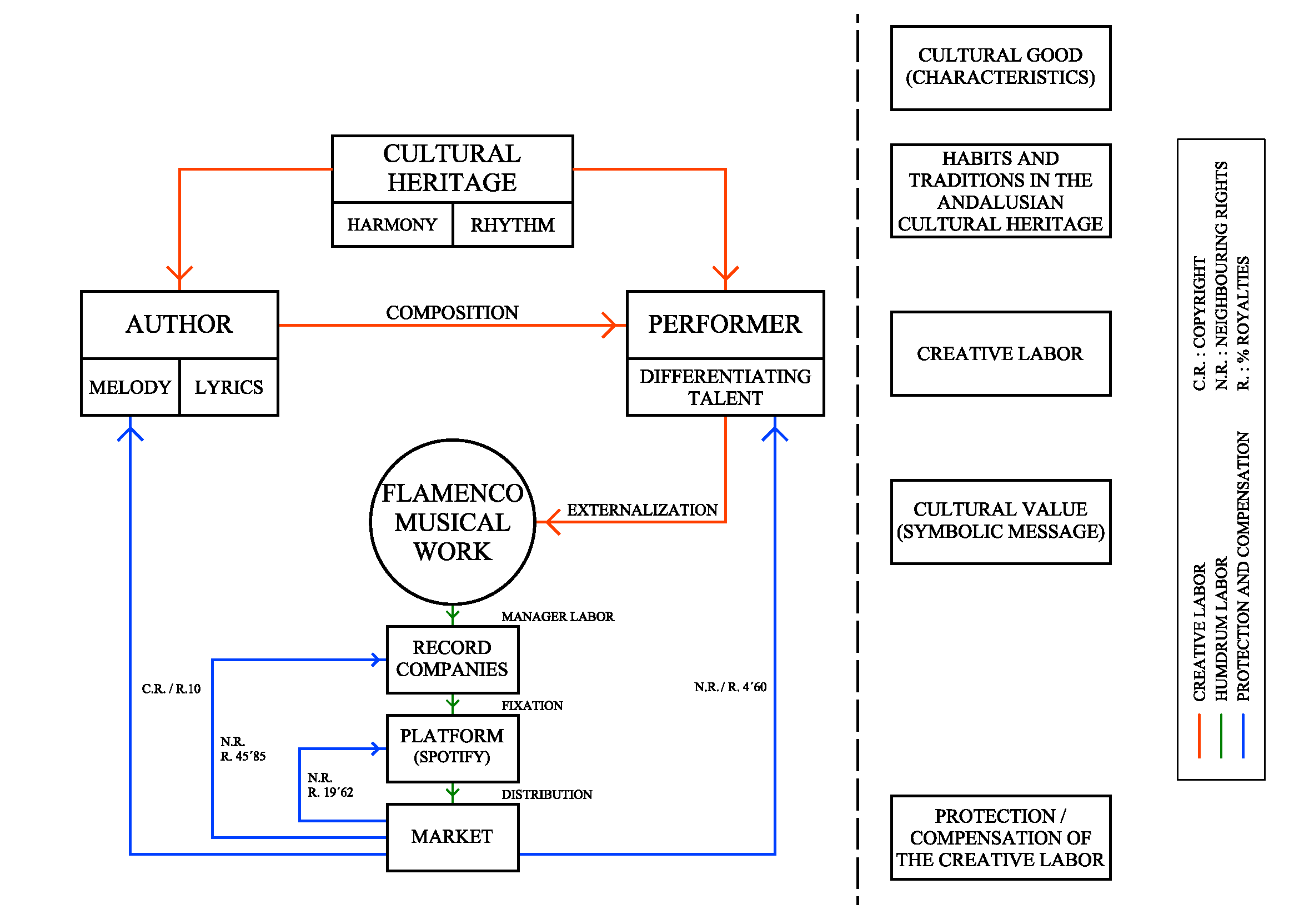 For all this, a solution is needed for the gap between importance of the contributions of the performer to the work and the protection they receive from the rights of intellectual property. We propose three solutions: on the one hand, thanks to the study of comparative law, the line marked by the joint works of US law (see Code of Federal Regulations) and collaborative works defended in the Spanish Law on the Intellectual Property Rights (TRLPI) in its article 7.1.

Following the argumentation of the creation process exposed, the agents involved give rise to a work with a result that would be protected by copyright. In this case the rights of the performers would increase because they would be considered as authors in collaboration. Due to the orality that characterizes flamenco, where elements like improvisation and intuition of the performer are fundamental, the work is continuously recreated. This opens the possibility of considering it as a composite work, idea exposed in article 9 of the TRLPI. This work is characterized by being a new work, which incorporates a preexisting composition without the collaboration of its author.

Another possible solution, in the case of Spain, would be the application of article 132 of the TRLPI (Román Pérez, 2010, p. 3). As collected therein, subsidiary provisions may apply from book I (where the authors appear) to the subjects that appear in book II (as are the performers). In this case the rights would be homologated between author and performer, but with the difference that the performer would not be considered as an author of the final work.