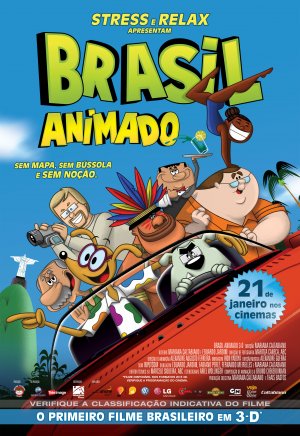 Creative activities tend to materialize within the landscape of large cities as agglomerations of specialized firms and skilled labour, which offer extremely innovative resources. Major cities have been the site of the vast expansion of commercial cultural production that has occurred in recent decades. They are the locus of a range of creative industries such as fashion, music, architecture, advertising, graphic arts, and film. Cultural industries are able to contribute to the evolution of cities while playing a crucial role in the social reproduction of economic systems that are essential elements in the formation of competitive advantages in a given territory. In Brazil, Rio de Janeiro created and benefited from the Brazilian’s film industry.

Economically productive creative territories are the source of competitiveness for firms, as they provide pools of diverse and qualified workers which fulfil all the creative and technical production needs of the film production process. They also provide an institutional environment that provides reliable and supportive frameworks for interactions between the numerous productive agents involved in the creative industries.

In this sense, they engender a processes of positive feedback, since the provision of such resources attracts companies and workers, reinforcing the development of the agglomeration and the productive territory and increasing, as a result, the generation of economies of agglomeration and the effects of proximity. Hence, the development of firms, film industry clusters, economically creative productive territories and the metropolitan economy are directly and symbiotically associated.

Regardless of the activity they may be engaged in, productive agglomerations gain economic profile as    a result of their ability to generate production and employment. Generally, they are responsible for the major part of the total amount of a given good produced in the country, as well as local sales, and they occupy an important position in the economy as much as they generate jobs, income, and tax. The first piece of evidence concerning the existence of a movie industry cluster in Rio de Janeiro is related to the profile of the city’s studios in the total number of films produced in Brazil and to the sector’s capacity to generate employment in the city. Data on film production were collected from the website of the National Cinema Agency (ANCINE). The dataset included only feature films that had been exhibited in a commercial cinema. The headquarters of the main producers were identified in order to determine the location of the production company.

We chose to collect data on employment from all sectors of the creative economy, as we believe there are significant interdependencies between different activities in the sector. For this purpose we use the categories proposed in the study developed by FIRJAN (2008), in which the economic activities of the “creative industries” were classified into 3 groups: core, related, and supporting. During the mid-1990s, the Brazilian film industry entered a phase known as the “Resumption” (la Retomada), which “designates the recovery process of film production in Brazil after one of its most serious crises in the early ’90s”. Employment and establishment data mapping of the core category demonstrated the existence of agglomerations in certain areas of the city, allowing the identification of spatial patters for Rio de Janeiro’s creative economy.

Map 1: Spatial distribution of formal employment and percentage participation for the “core activities” of the creative economy chain – city of Rio de Janeiro – 2010 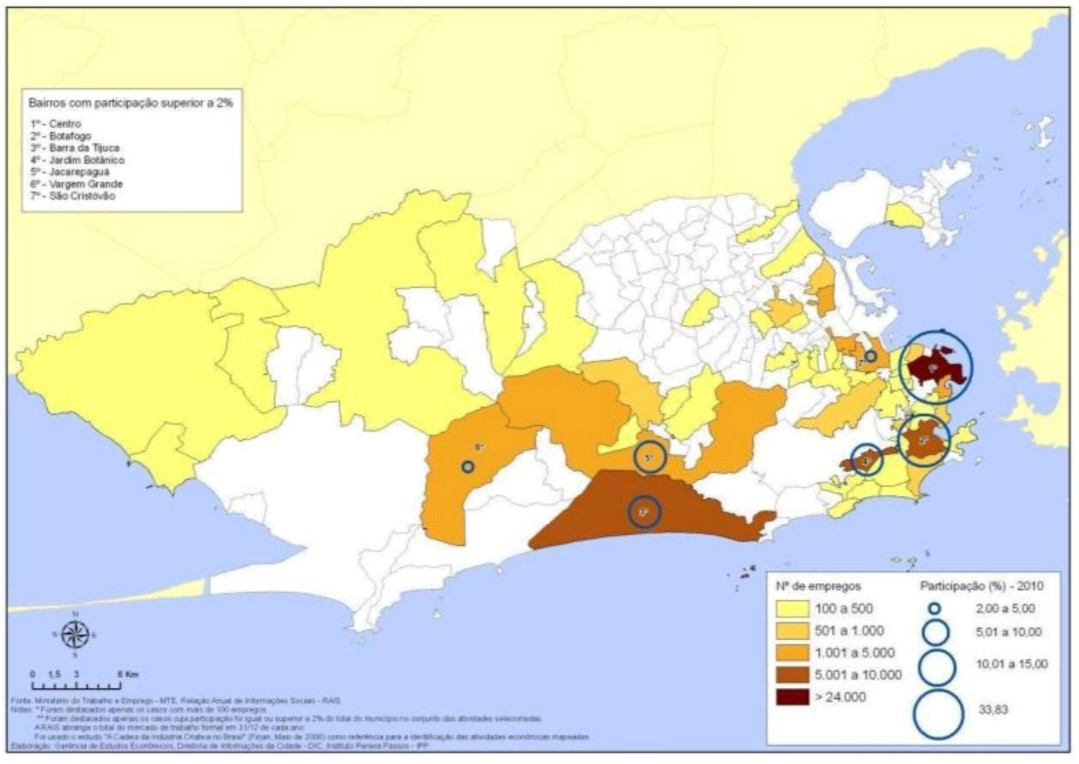 As may be seen from Figure 1, below, in the period 1995-2011 the number of films produced in the country increased, revealing the strengthening of the national film industry. Rio de Janeiro was the city were 55% of films were produced in the period between 1995 and 2011, followed by Sao Paulo (30%), and Rio Grande do Sul (4%). A similar cluster is found for market share of Brazilian cinema by producer headquarters in the same period, by public and income, the largest is found in Rio de Janeiro (83% to 84%), followed by Sao Paulo (15% to 14%), and Rio Grande do Sul (1%).

While other Brazilian states are still struggling to ensure productive activities, Rio de Janeiro has entered a later stage, which consists in consolidating a cinema audience. Thus, although it is apparent that towards the end of the period under analysis Rio de Janeiro accounted for a lower percentage of the total number of films produced in the country, there was a corresponding increase in the commercial success they enjoyed.

The Grupo Globo and, in particular its cinema branch Globo Filmes, are at the heart of the Brazilian film production system, and specifically of the production complex located in Rio de Janeiro. It brings together different producers to work on single projects, whose development requires a range of specialized services from script production to final editing. Independent producers sometimes associate with Globo Filmes and on other occasions carry out projects in partnership with other independent companies. However, the production strategy they adopt heavily relies on different firms that provide specialized services and suppliers of inputs to the project’s production. That is, Globo Filmes is not directly involved with the production but plays a central role in marketing and provides a national framework for their dissemination on television. In addition to the leverage exerted by the national cinema industry and the institutionalization of a cinematographic standard, this strategy has resulted in an impressive market concentration for the films in which Globo Filmes has an interest.

The main weakness of the national film industry in Brazil is that only two distributors, both located in Rio de Janeiro, are responsible for distributing Brazilian productions. The largest share of control at this stage lies in the arms of multinationals, whose principal aim is to market films produced in Hollywood. In this sense, the marketing of film represents a struggle to gain sway in the national market space. Like the studios, distribution companies resort to the economically productive creative territory in search of other firms and skilled workers able to help them achieve successes in relating films.

João Luiz de Figueiredo is Coordinator of the Creative Economy Lab and Head of Entertainment Management at the Escola Superior de Propaganda e Marketing (ESPM-Rio), Professor at the Department of Geography at Pontifícia Universidad Católica (PUC-Rio).

Rodrigo Carvalho is Professor and Coordinator of the Creative Economy Lab at the Escola Superior de Propaganda e Marketing (ESPM-Rio).