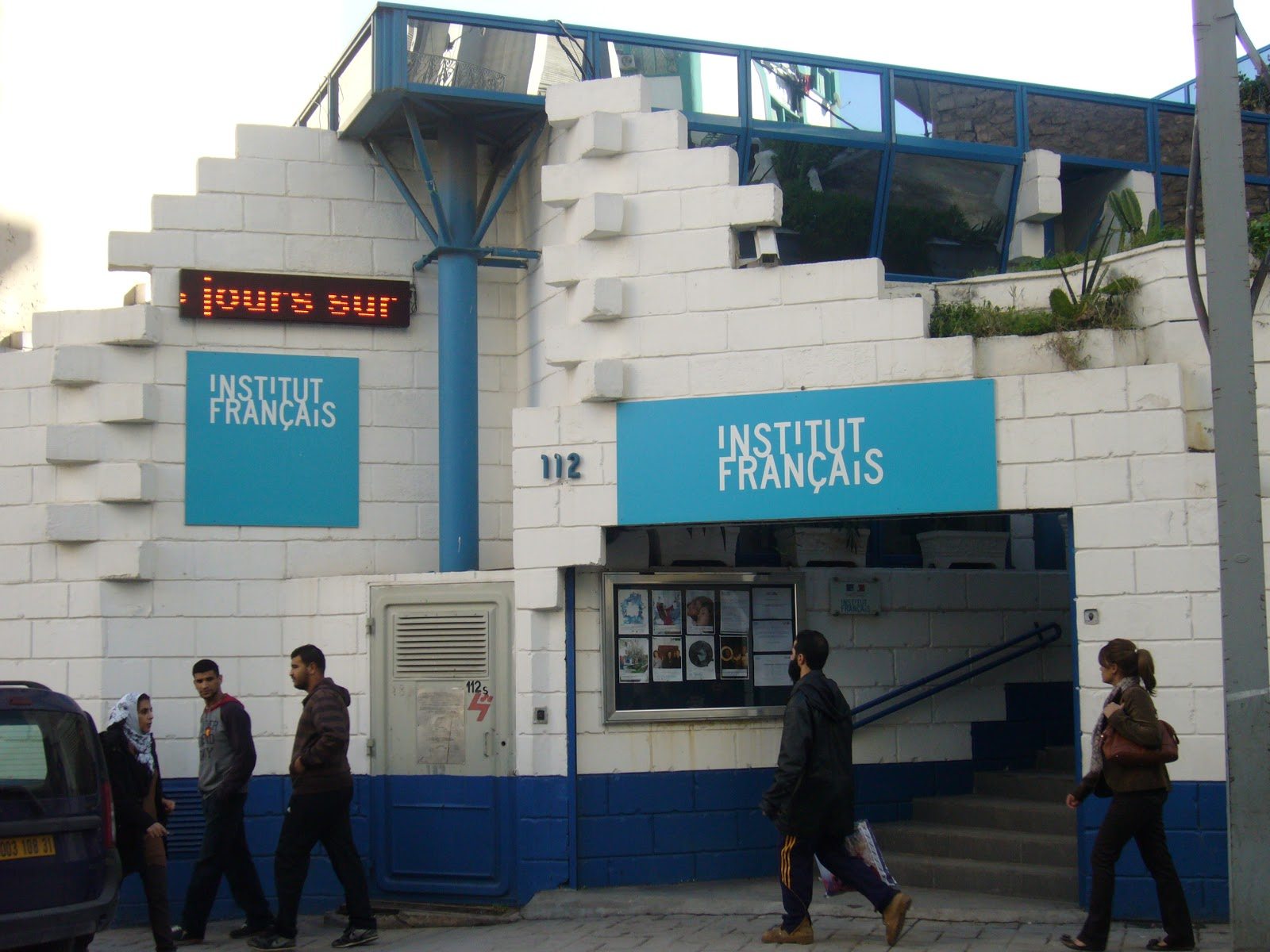 Cultural diplomacy has been steadily gaining momentum the past decade in EU policy-making circles. Despite genuine efforts to build a common strategy, the member-states still have a long way as their individual differences in managing cultural relations present striking variance.

Looking at the operation of six Cultural Institutes (British Council, Institut français, Goethe Institut, Instituto Cervantes, Swedish Institute, Hellenic Foundation for Culture), it becomes evident that each has a very unique relationship to its reporting authority, which challenges traditional notions of the arm’s length status. The delegation of powers to arm’s length bodies in the area of culture is necessary, so that the field does not lose legitimacy in the eyes of the public. Cultural diplomacy appears to bear negative connotations due to its association to an elite bureaucracy whose currency has been progressively failing in recent years. It seems that non-state agents enjoy greater authority compared to state entities working in the same field. The Cultural Institutes, sensing this shift, have changed their rhetoric and now take distance from ‘cultural diplomacy’ repositioning themselves as actors that pursue ‘international cultural relations’. However, the bond they have with the state is a constant reminder of the instrumental role they are required to play. How does the supervision of the Cultural Institutes actually take place?

The Cultural Institutes usually report to the Ministry of Foreign Affairs of their country, although there are exceptions like the Hellenic Foundation for Culture which reports to the Ministry of Culture and Sports and the Instituto Cervantes which operates under the shared guardianship of the Ministry of Foreign Affairs and the Ministry of Education, Culture and Sport. The interaction between the ministerial agents and the Cultural Institutes is taking place through a system of synergic elements. Funding, agenda setting, evaluation, hierarchy and appointment power are the five ‘touchpoints’ that bring the Cultural Institutes under the umbrella of the state. The first three touchpoints are recurrent in the sense that they are repeated yearly, or every four or five years depending on the case. The last two touchpoints, hierarchy and appointment power, are institutionally embedded, hence their effect is continuous and the impact they have on procedures is more profound, albeit hidden. The five-point methodological framework is a useful guide to study the arm’s length relationship in cultural diplomacy. Each of the five dimensions emerges differently in each of the case studies under analysis. The agency of the state is sometimes more dynamic, allowing for divergence, and other times it is deontic leaving no room to negotiate. We were particularly interested in investigating issues of agenda setting and hierarchy asking questions about power dynamics, so we decided to focus on the relationship to the central service of the Ministry of Foreign Affairs and the global network of embassies.

British Council is building its global strategy top-down based on target-bound contracts set by the Foreign and Commonwealth Office. The flow of command is standard in the sense that priorities and goals are allocated from the centre to the periphery as seen in figure 1. The relationship to the embassies, however, is not binding since the British Council works with its own budget and staff. 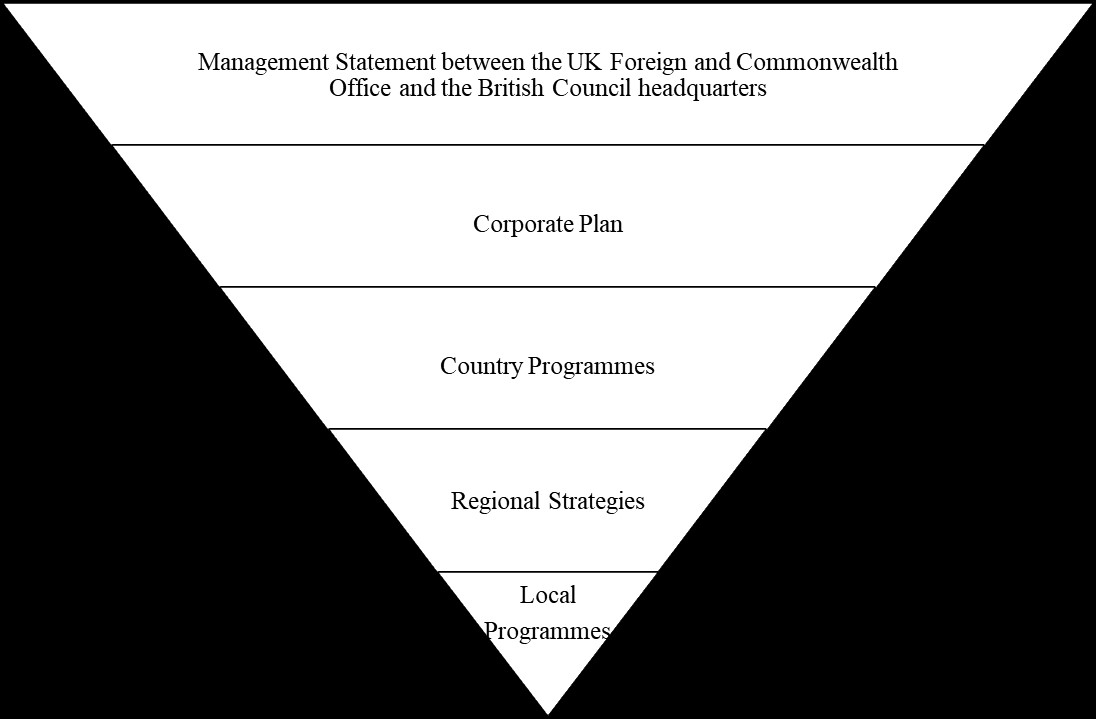 The German Cultural Institute is building its global strategy taking into consideration feedback that comes from the local offices. As in the British case, the Germans design the basic strategy based on a framework agreement signed between the general director of the Goethe Institut and the German Federal Foreign Office as in figure 2. After this step, the design acquires a bottom-up component. The basic strategy is shared across the global network and for each region (e.g. NW Europe), two of the local offices take on the responsibility of narrowing down the basic strategy by specifying projects. Likewise to the British Council, the relationship to the network of embassies is cooperative and not hierarchically restrictive as the two services operate as distinct institutions of the German state. 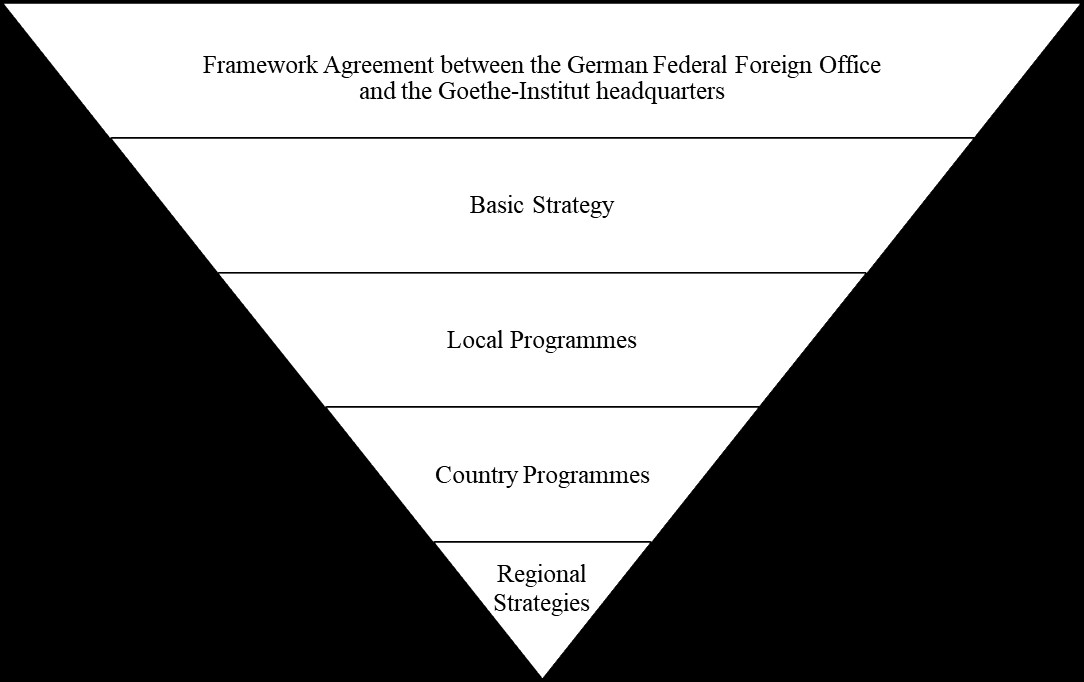 Figure 2. Strategic planning in the Goethe-Institut.

The Institut français is the most interesting case to study as the French Ministry of Foreign Affairs has fused all its foreign cultural affairs services into one single operator in 2011 in an effort to modernize a very old and cumbersome network. Hierarchy has provided the means to ensure compliance; in this case, it is the embassy that sets the strategic tone to all the Institut français offices in a given country. The ambassador is signing an action plan endorsed by the Ministry of Foreign Affairs and the strategy is built bottom-up from thereon, as figure 3 shows. In the French case, the Institut français in Paris does not operate as the administrative headquarters of the global network as in every other case, but works more as a resource center. It provides copyrighted material to the offices and also has a reservoir of funds available to the network through calls. In all the cases above, there are feedback loops which allow the communication of disagreements ensuring that consensus will be ultimately achieved at all levels (regional, national, local). 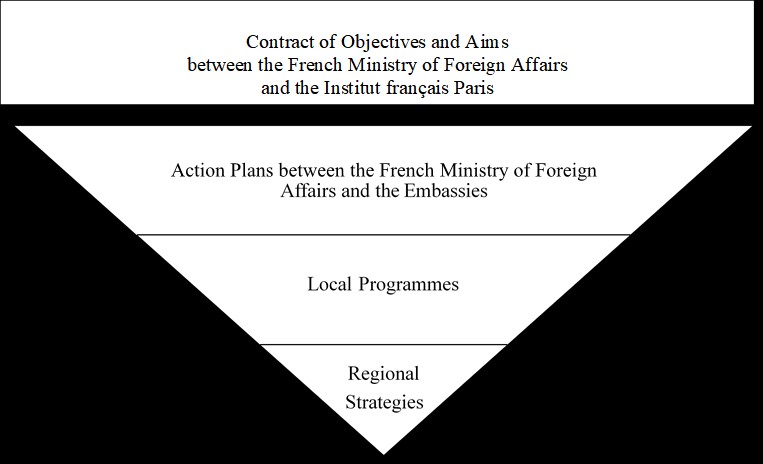 The rest of the case studies do not have a worldwide network of offices, so the flow of command does not take the same form as in the cases already presented. However, the Instituto Cervantes is on a growth phase and is considering to follow the global strategy model of the British Council. On the other hand, the Swedish Institute, with only two physical offices, is investing heavily on its digital strategy while considering a ‘smart’ expansion by joining forces with other Swedish or European agents to pursue its interests. Last, the Hellenic Foundation for Culture is caught in a latent rivalry between the Ministry of Foreign Affairs and the Ministry of Culture and Sports about who is the responsible authority to exercise culture in external relations leaving the organization paralyzed.

Evidently, the agency of the state may unfold in various expressions, which serve as a testimony for its fluid nature. Hence, power can be argued to rest in both sides of the instrumental relationship. It is the intentions that will determine the equilibrium.

Dr. Kalliopi Fouseki is a Senior Lecturer at the Institute for Sustainable Heritage at University College London and her work focuses on heritage values and cultural sustainability.

Miss Dimitra Kizlari is a final-year doctoral candidate at the UCL Institute for Sustainable Heritage working on cultural diplomacy governance.