CHANGING FUNDERS, CHANGING VALUES? EVIDENCE ON CROWDFUNDING IN THE NETHERLANDS 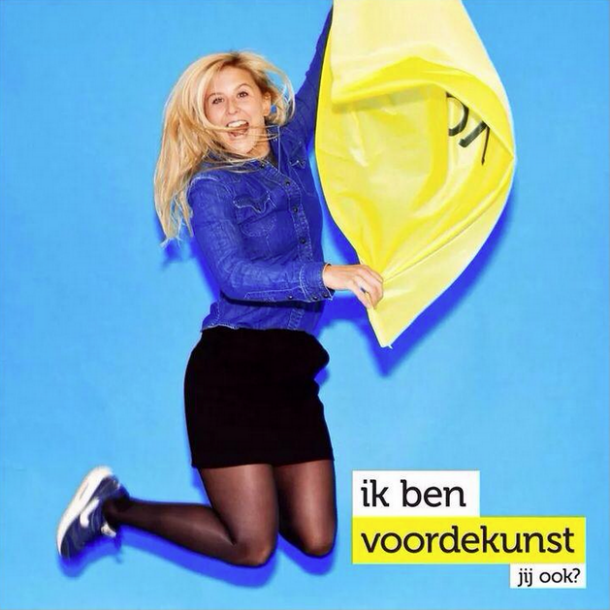 What happens to art worlds when funding mechanisms change? The Dutch case is of particular interest as the national government cut around 25% of the national cultural budget in 2013. This was legitimized by arguing that the cultural sector was ‘over-reliant on public funding’, pointing to crowdfunding as an alternative to state funding. But, what happens when the government relies on ‘the wisdom of the crowd’ rather than decisions of experts from the cultural sector?

To answer this question, I used a value-based analysis model developed by French sociologist Luc Boltanski and economist Laurent Thévenot. They argue that while in real life arguments may be blurry and fuzzy, behind them we can discern a set of seven coherent and relatively durable ‘value regimes’. In capitalist and neoliberal societies, such as ours, market competition and economic efficiency (which they refer to as the market value regime and the industrial value regime) have become very important values, oftentimes trumping values related to history and family relations (a regime they call domestic), to artistry and authenticity (a regime they call inspired), or to the general interest (a regime they call civic). The regimes were used to analyze the values behind the project proposals on voordekunst.nl, the largest crowdfunding website for the arts in the Netherlands. They also were the basis for a questionnaire administered to funders through voordekunst.nl.

Table 1: Values underlying crowdfunding of arts and culture in the Netherlands 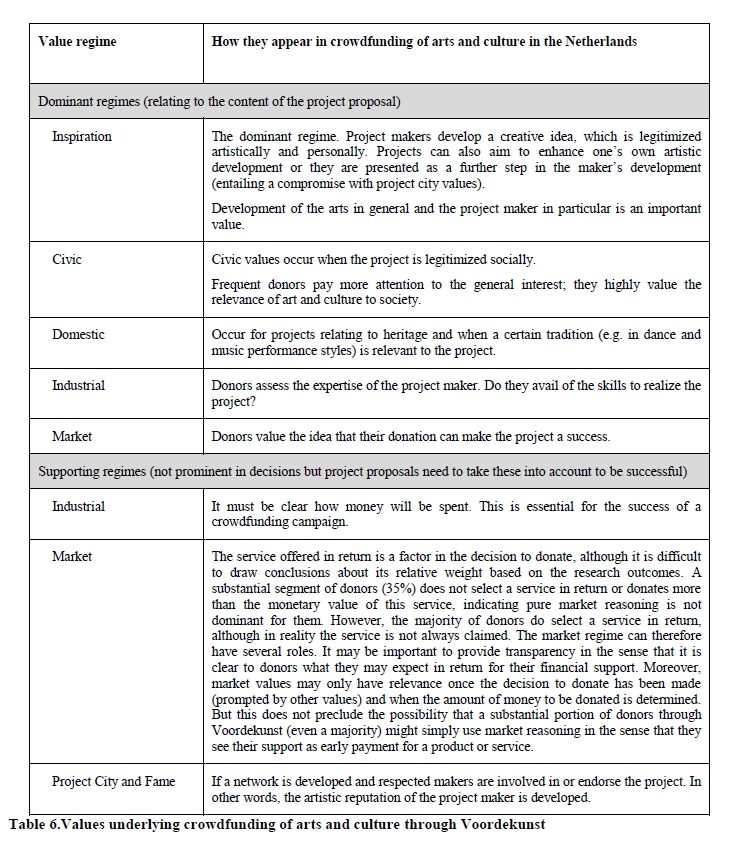 It turned out crowdfunders are driven by the same values that artists hold dear, namely artistic development and cultural relevance. And they also keep a keen eye on civic values as they see their donations as a way to ‘do something good for society’. These are the same two regimes behind public cultural policies: the inspired and the civic regimes. Crowdfunders want to be convinced that the produced work is qualitatively good and that it is relevant, either for the art sector as a whole or for the development of the artist in particular. Moreover, crowdfunders want to know that the artist possesses the expertise to execute the work. Endorsements by well-know and seasoned artists are therefore a plus in the crowdfunding campaign. Such endorsements are also helpful when applying for public subsidies. Crowdfunders also expect transparency on how their money will be spent (the industrial regime), making the formulation of a solid budget a necessity, again, not unlike applying for a subsidy.

The transparency can also be provided by offering a reward in exchange for a donation: a ticket to the show, a copy of the DVD produced, or a meet-and-greet with the artists. Particularly generous donors can expect a private concert or performance or some other special treat. This does make crowdfunding more market-oriented than funding through public subsidies although not fully reducing crowdfunding to a mere market transaction: 35% of Dutch crowdfunders on voordekunst.nl pay a higher donation than the monetary value of what they will receive or do not expect anything in return at all. But 65% does, so market values do play an important role.

However, crowdfunding is certainly not a cure for all ails. This is for two reasons. First, it is typically a form of funding which relates to small, start-up initiatives that can survive on project funding. Second, if we look at the numbers, crowdfunding campaigns raise € 5.000 to €5.500 euros on average and that money does not come easily. It is hard work to run a successful crowdfunding campaign, which implies communicating with an expanding circle of small individual donors. It takes a lot of planning and time. Larger cultural facilities, such as libraries, museums and archives, theatre and dance companies, or theatre venues cannot fund their programmes or the upkeep of their collections with such a budget. So, evidence suggests crowdfunding is only suitable for a very specific part of the cultural sector: for artists working independently, who may not have the symbolic capital to be successful in subsidy applications. Moreover, voordekunst.nl raised € 3.636.950 in 2015 and € 4.230.084 in 2016. So sure, it is a growing phenomenon, but the growth rate will not in the near future compensate the aforementioned budget cuts, which totaled ca. 200 million on the level of the state alone. It is wise to trust the wisdom of the crowd when funding art and culture, but all those project-makers rely on a network of fully functional cultural institutions that provide the opportunities to develop their projects and present them to an audience. Without such a system, no artists or projects will be possible, and therefore no funding by the crowd.